How I Came to Write This Book: Lawrence Block 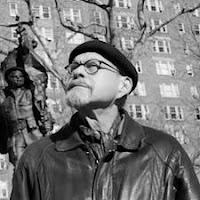 GETTING OFF debuts from Hard Case Crime on 9/20.

HOW I CAME TO WRITE THIS BOOK: Lawrence Block’s GETTING OFF

It’s not the first book of mine that started as a short story.

In 1983 I’d realized I was done writing about Matthew Scudder. The fifth book, Eight Million Ways to Die, had been the most successful critically and commercially, but it seemed to me to complete the story and leave me with nowhere to go. But I’d promised an anthologist a Scudder short story, so I wrote one set in the past. I called it “By the Dawn’s Early Light,” and it won an Edgar, and I thought of some other plot threads to keep it company, and expanded it tenfold into a novel, When the Sacred Ginmill Closes. That was the sixth Scudder novel, and this May Mulholland books brought out #17, A Drop of the Hard Stuff.
In 1989 I wrote a short story about a hit man whose work takes him to a town in Oregon, where he makes the mistake of getting to know his quarry. He has fantasies of retiring, settling there himself, living a new life. Then one day he wakes up, returns to reality, kills the guy and goes home. I called it “Answers to Soldier,” and Playboy bought it, and it got shortlisted for an Edgar, and I thought no more of it for a couple of years.
Then one thing led to another, and I’ve written four books about Keller, my Urban Lonely Guy of assassins, most recently Hit & Run. And I’ve self-published a novelette, “Keller in Dallas” http://tinyurl.com/5ukytkx that will be the opening section of a fifth Keller novel.
So a few years ago I was editing an Akashic anthology, Manhattan Noir, and was expected to write a story for it myself. So I did: older guy picks up younger woman in Hell’s Kitchen bar, hinting that it’s a dangerous neighborhood, that she has to be careful out there, and he takes her home, and we know he’s gonna kill her, and instead she kills him, and we get that this is what she does. I called it “If You Can’t Stand the Heat.”
A while later my friend S. J. Rozan’s editing Bronx Noir, and I owe her a favor in the form of a story. So I wrote one. Same girl, different story, and set in the Bronx. (Well, Riverdale. That’s in the Bronx, though some of its inhabitants seem to think otherwise.)
Then came Indian Country Noir. By now the young lady, who still doesn’t have a name she can call her own, has left New York for the greener pastures of Michigan, and an Indian-owned casino. She’s become my default heroine; ask me for a short story, and she’s what you’re going to get.
See, I’m getting so I really like this girl. And the next invitational anthology (Warriors, by Gardner Dozois and George R. R. Martin) took her story to a new level, as we find out who she is and what she’s about, and why she’s acting out so furiously.
By the time I finished that story (“Clean Slate”), I was in love with the girl. And I could see that I was writing a novel, and I could also see that it was probably going to be way over the top in terms of sex and violence. I figured I’d just let it be whatever it wanted to be, and over the succeeding months I completed it. Charles Ardai, who’d reprinted some of my early noir novels at Hard Case Crime, was hugely helpful with this one, as I engaged in the twin tasks of telling the rest of Kit Tolliver’s’s story (that’s her name, although she’s usually calling herself something else) and getting the early part into consistent shape.
I can’t recall ever having so much sheer joy writing anything in my life.
The open pen name (“by Lawrence Block writing as Jill Emerson”) and the subtitle (“a novel of sex and violence”) are both there for the same reason—i.e., to warn off and ward off those readers who were hoping for a cozy mystery about a gentleman burglar and his stubtailed cat. Because not everybody’s going to be ready for Kit and her way of coping with life. Publishers Weekly, always very generous in their reviews of my work, took exception to the sexual quotient of Getting Off. (And that’s okay: Too Sexy for Publishers Weekly! Is not the worst thing anybody ever said about a book.)
OTOH, Julia Barrett wrote the kind of review (http://tinyurl.com/3hl9k4b) that makes an old man glad he learned to type. If some more readers really get Getting Off the way she does, neither I nor Jill Emerson have anything to worry about.

Getting Off is available for pre-order prior to 9/20 publication. Here’s a link: http://tinyurl.com/6c26h3r

Patti - Thanks for hosting Lawrence.

Lawrence - Thanks for sharing how Kit Tolliver came to be. I think it's so interesting when a character haunts the author and demands more "on air" time. I've got a character like that, too, although she's not much like Kit, and I can see I'm going to have to do something with her...

I much enjoyed this. Looking forward to "Getting off."

I'm going to repeat myself - read this book. Lawrence Block is an artist. I just don't have enough big adjectives rattling around in my brain to praise Getting Off highly enough.
It's obvious the girl in question is no blow-up doll. She was born, grew to maturity and lives a life - This girl is flesh and blood.

Nice piece -- thanks all around. That's a helluva review too from Julia Rachel Barrett so I'm putting this on my TBR list. The cover, by the way, is pretty cool, too. I think it's by Gregory Manchess.

It is indeed by Gregory Manchess, and it's brilliant, isn't it? I've been pushing for shelf cards for bookstores: "You Lick It, You Buy It."

Or book plates with the cover on them and signed by the author. Let's give people a reason to buy print books.

I'll be reading this because I read everything Mr. Block puts out.

I love Kit Tolliver and Lawrence Block and his alter-ego Jill Emerson. Kit is the most unlikely heroine you will ever meet. So sympathetic in all her glorious warp-ed-ness.
Getting Off is a can't put down read. I couldn't stop...
Hello, L.B. Kind words!