HOW I CAME TO WRITE THIS BOOK: James Winter 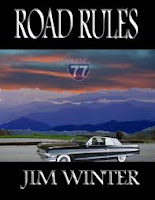 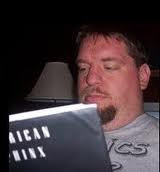 HOW I CAME TO WRITE THIS BOOK:
Road Rules by Jim Winter
When the seeds of Road Rules were first sown, I still lived in an apartment in Mt. Washington, both my parents were alive, and I was married to someone else. I could point out I was with a different company, but I worked there for 11 years and wound up working with a former manager at my current job. So employment is probably the only constant.
The first piece of Road Rules to emerge was the character of Timmy Mason. I’d met this rather bizarre guy who worked for an Amway-ish financial services company. He was a bit cocky, definitely not above a little adultery, and even managed to screw my future ex out of some money until his boss came down on him hard. Most writers would get even by basing a character on him and killing him off in the most humiliating way. I, on the other hand, thought, “Wouldn’t it be great if Seth Green played him in a movie?” So I slapped the name Tim Mason on this nutjob and started looking for a story.
The second piece was the car. It appears in Second Hand Goods, the second Nick Kepler novel. When my publisher imploded in 2006, I was pretty sure that book would never see the light of day. Now that it will, I can see I’ll have some ‘splainin’ to do when it does. Two novels with a stolen Caddie prominently featured? Maybe I’ll make it a troika and beg Stephen King to let me reimagine Christine with a pink Cadillac in lieu of a 58 Fury. But the Caddie made a nice hook when I got it in my head to write a caper. So add the Caddie to the red-headed clown.
The third piece was Sharon Harrow, aka Cinnamon. It’s easy for a white male to write white male characters. I wanted to challenge myself. I wanted a female protag, and not another young blonde with boyfriend trouble (not that there’s anything wrong with that.) No, this woman would have something to prove that had nothing to do with race or gender. She had to prove she knew her stuff despite family thinking otherwise.
So how did it all come together?
Several friends dared me to do NaNoWriMo in 2006. The chorus grew so loud that I felt compelled to write an outline. And then I made a pitch to Charles Ardai, head of Hard Case Crime. I didn’t want to sell it to him. I wanted him to talk me out of it. With a bit of a smirk, he said, “Let me read it when you’re done.”
Thanks, Charles. That just wrecked my November that year.
Or did it? During NaNoWriMo, I took a rare fall vacation and ended up finishing the book in a cottage in Southeast Ohio’s Hocking Hills, a wilderness area where the hills aspire to mountainhood, Internet is a rumor, and cell coverage is nonexistent. I read the scene where Mike Blake gets recruited for the road trip to Hell by Stan.
I did this book as a lark. Then it landed me an agent. Then it became an online experiment. And now here we are.

Where the internet is just a rumor sounds like a great place to write.

I've read a couple of samples during Jim's blog tour. (Posted one of them on my own blog, which raised standards there considerably.) ROAD RULES is on my Kindle, ready to be read as soon as I get a couple of commitments out of the way.