These two books no longer sit on my coffee 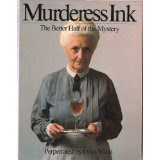 table. I wore them both out long ago. The first MURDER INK, the Mystery Lover's Companion, was published in the seventies and 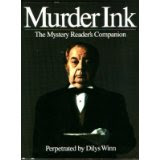 For years, I thumbed through these books several times a week, enjoying the articles Winn had collected, learning about new crime fiction I might want to try. I doubt there has ever been a book I spent more time with. And suddenly, there were dated, both in condition and in content and they disappeared. But they introduced me to the genre I still love.

Imperfect though the articles or selections might be, none of the books I now have on my coffee table come near to meaning this much to me. None of them have brought me more joy or knowledge. Thanks Dilys Winn.

Ed Gorman is the author of numerous fine crime and western stories. He edits anthologies and contributes to them You can find him here. He is a member of the TOP SUSPENSE GROUP. 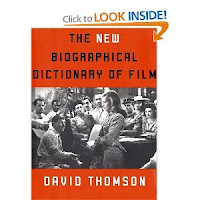 I like to read while I eat. Lately I've been working my way through David Thomson's enormous Biographical Dictionary of Film at lunch time. Thomson is the most interesting and entertaining flm critic since Pauline Kael--and every bit as frustrating. When I disagree with him, I want to call him up and read him his rights--before violating every one of them.

Today I read his take on Edmond O'Brien. Thomson notes going in that movie stars aren't supposed to sweat. That makes them too much like everybody in the audience. Part of movie stardom is inaccessability, fantasy. But what a clever hook because beefy O'Brien sweated all the time, especially in his most memorable movie DOA. He was also fat, frequently out of breath, devoutly neurotic and often frightened. He was, in other words, pretty much like the people in the darkness watching him on the big screen. An Everyman of sorts.

In the course of his entry on O'Brien, Thomson makes clear that he enjoys the odd-ball actors and actresses far more than he does the stars. Thus he finds Warren Oates vastly more compelling than Robert Redford and Jeff Goldblum more intriguing than Paul Newman.

When I was a kid I rarely wondered about the lives of the stars. But I was always curious about character actors such as Elisha Cook, Jr. and J. Carrol Naish. There was a vitality to their performances that the stars were rarely capable of matching. And in the case of Cook, there was a melancholy and weariness that I recognized even then as being much like my own.

Same with the women. The ones I was always excited about were the second- and third-leads. They were the ones I got crushes on. They were often as pretty as the leading ladies, sometimes even prettier. And they frequently had more interesting roles, the bitch, the tart, the victim.

Barry Gifford once remarked that when you see a musical with all those young gorgeous girl dancers you have to wonder what became of them. The majority probably became housewives; more than a few probably took to the streets as parts became harder and harder to come by; and a lucky handful became the wives of powerful Hwood men.

I've been watching a lot of silent films of TCM and the same impulse grabs me then, too. Who were they? What happened to them? Did they know they'd become immortal? A full century later I sit in our family room and watch them as--most likely anyway--another century from now people will still be watching them. This is probably heresy of sorts but to me film immortality is far more imposing than literary immortality.

For whatever reason, Blogger just ate my response to both of you, Patti and Ed. Blogger does indeed have its charms.

Nothing I have fits today's deal.

So, Barry Ergang reviews STRIP FOR MURDER by Richard S. Prather today on my blog.
http://kevintipplescorner.blogspot.com/

I knew someone would do either one of these books. Loved them. I got both of them from my friends one Christmas eons ago when I was in high school. Wish I still had them but they've disappeared along with most of my belongings from the house I grew up in.

Belatedly, I post a forgotten book, too. I have a backlog of them, but no time lately!

I love that video, Patti! What a sweetie of a guy. Youtube is just so full of wonders. HA! Some of those books look mighty interesting. But maybe NOT the outsize one of standing nudes. :)

I thought I had the Murderers Ink book you posted about but when I looked - nada. I must have imagined it.

I posted my Forfotten Book entry just a few minutes ago.

He is the nicest guy. He has a site where he reviews books too so I have lots to choose from. Thanks!

Thanks, but I hope this wasn't expressly coffee table book day. If so, I missed it.

My new FFB link is here: