Women Writing on Their Husband's Deaths 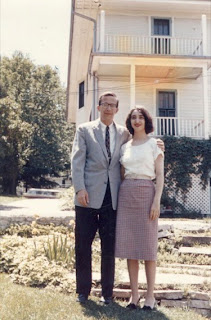 I just read Joyce Carol Oates' account of the death of her husband, Raymond Smith in the NEW YORKER (part of a book, I think). His was a somewhat sudden and unexpected death that rocked her to her core.

I have also read Joan Didion's account of her husband's death (THE YEAR OF MAGICAL THINKING) and the poems of Tess Gallagher on the death of Raymond Carver.

Let me tell you this. Having twice in the last two years cleared out hospital rooms of those final items of clothing and hygiene for parents, I cannot do it again. I cannot contemplate packing up that prosaic pair of pajamas, that used toothbrush, that stick of deodorant, that bathrobe so rarely worn, the slippers with the heel worn down, the cards so hopefully sent, the radio playing songs of Tony Bennett.

JCO's account was one of the saddest pieces of writing I have ever read. And when it comes to it, should it, I will vanish magically from the earth rather than do this again. Three times is too many and someone must clear out my room instead.

I have a friend who reads the obits in the NYT first thing each day. Do you read them? Does an interest in crime mean an interest in death?
Posted by pattinase (abbott) at 9:00 AM

I actually read "The Year of Magical Thinking" on the way to my mother's funeral. Her death wasn't as much a blow as, nearly a year later, dividing her stuff with my siblings. It is a hard process and, sadly my life has taken a wonderful turn for the better since her death four years ago. She never saw me as happy as I am now. She never met her two, youngest grandchildren.

Yes, I picked it up after my mother's death. Don't think I could read it after a spouse's though.
Thank goodness my mother and father lived long enough to see a great grandchild. Glad you have happiness in these last years and I know she would be too. Or is.
My interest in crime fiction began with a desire to see puzzles solved but now I think it's more about the victims. Good blog topic, thanks.

I'm not sure I would care to share (if that's the right word) details of my father's death or my mom's slide into dementia. Just not my thing to write or read. Maybe some elements of these deaths will find their way into a fictional story of mine but that's about it.

Me either. If the details come out it will be from my subconscious where all the best writing I do comes from.

Patti, I read the Joan Didion book too. And then to deal with her daughter dying on top of her husband's death would seem to be almost more than anyone could bear.

I do not check the obituaries obsessively, only read them if it's someone I've heard of.

Somehow I felt her daughter's plight got lost in the grief over her husband. At least in the book if not in real life. I couldn't see the play, I don't think.

Eventually I'll write more about my mom's death. I've been too close to it still now. I am starting to read the obits in my home town paper simply because I'm recognizeing people there now.

I read the local obits (like Charles, because I usually know some of the people--or their relatives), but only read the "major" obits if I'm interested in the person (for example, I just heard this morning that "Ivory Queen of Soul" Teena Marie, who sang with Rick James, died yesterday at age 54--I'm interested in reading that obit).

Joan Didion said TYOMT was already in galleys when her daughter died, so she decided to leave the book as it was and not revise it to include that information. My guess is that being a writer who processes so much of her life through words, Joan will eventually write about her daughter's death.

I understand that JCO remarried after her first husband's death--so, devastating as his death was, life does eventually go on after the death of a beloved spouse.

One more thing, Donald Hall's THE BEST DAY, THE WORST DAY (about his marriage to poet Jane Kenyon and her death from leukemia) is a very good book about the opposite side of the equation: A man writing about the death of his wife.

yes, she married quickly. I think she was very used to having someone to take care of certain aspects of her life-or so I have been told.
Oh, I will look for the Hall one, thanks. I have her poetry somewhere. Certainly not up to his standards but accessible and graceful.

Deb, here is the Times obit of Teena Marie.

In a weird coincidence as we were discussing it this morning, the radio started playing Rick James doing "Super Freak."

I always read the obituaries, thankful that I don't see my own name. The local papers in Southern Maryland always have interesting ones with great insights into a person's life; I'm far more interested in their lives than in their death. I often go online to check the obituary pages in my hometown because I know more and more of them.

It's the ones who died too young or too tragically that get to me; I send out a silent prayer for them.

I may someday write about my parents' or my in-laws' deaths, but not anytime soon.

No, it doesn't. Your comment reminds me that hardly anyone not part of a violent crime passes away at home any more, it's all hospital. Thank God my parents both went while living a fairly normal life, just fell over from heart attack, so there was no cleaning out of possessions from a hospital room. The house, of course, was another matter.

It's too bad the medical-pharmaceutical complex has evolved to intrude into every aspect of our lives.

I admit to putting my head in the sand about such stuff, I try not to read sad things.

I know at least two women who woke up to find their husband dead in bed next to them. I always thought that was a pretty horrible thing.

Jackie's grandfather went in the best way - dropped dead at 87 years old, on his way to work.

I find the obits the best part of the NYTimes, since they typically celebrate lives of achievement. They remind me that the world is not full of shits - i.e., the people who make up the rest of the news.

Thanks for the heads up on the JCO article. I am a huge fan of her writing and will certainly check it out.

The amazing thing about the article is how razor sharp her memory is. I can't imagine taking it all in as she did.
The obits scare and fascinate me. I cheer on the ones who've lived into their nineties and dread hearing of deaths before sixty.

An interest in crime fiction might even tend to mean a defiance of death, and other insults to life. Much as an interest in horror and suspense fiction often seems to mean a desire to learn to cope with terror, even if it's never mastered...particularly since they deal directly with extinction.

My most selfish reason for mourning Raymond Smith was the loss of the ONTARIO REVIEW, where he got to express his own artistry to at least some degree. My favorite of the eclectic littles.

Loved TOR. What must it be like living in the shadows?

My favorite regular feature of Geoff Bradley's CADS is Marv Lachman's "Death of a Mystery Writer" section, in which I am always amazed at how many mystery writers seem to live to a very ripe old age. 90+ is common and even 100 is not unheard of.

plectorI read the local obits and I'm happy any day that there is no one who I know personally or know about. And that's in a city of 700,000. I admit that I'm also looking for people involved in sport because I co-write an annual column about who died during the past year. I was working on it today for a column that will run the first week of January and won't have the space to name all the people I would like to. I also read the year-end lists of celebrity deaths and every year there are more names I don't recognize. It's all part of getting older.

The year end issue of the NYT Magazine always gives me pause. I try not to dwell on death but it's hard not to sometimes.

Ron Scheer has it right. The Times obits are the best part of the paper. A legendary obituary writer there, Robert McG. Thomas was so celebrated that his best obits were collected and published by Scribner in a book called 52 McGs. It is one of the most treasured and valuable books I own. I think obituary writing is the highest and most important art in journalism.

I imagine it functions as capsule biographies.

No, I don´t think I am particularly fascinated by death. I like the puzzle, the engaging characters etc. If someone near me died, I can´t imagine I´d write about it directly, but a few years ago when I wrote about a protagonist whose father died, I thought back to when my own father died fifteen years ago. I shed a tear or two and then I wrote down what ´Anna´ felt and what mattered to her in that situation.

As I didn't mention yesterday, this reminds me a bit of the early episode of GILMORE GIRLS in which Edward Herrmann's Richard has a heart attack, and Kelly Bishop's Emily comes into to see him post-op, and eventually demands, not unaware of what she's implying, that she be allowed to die ahead of him; slightly bemused as well as amused, he agrees that he's game to let her go first.