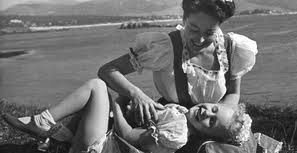 There are several movies out now that show mothers in a bad light. I could almost get mad about this if the movies (and the actresses) weren't quite so good.

Barbara Hershey (BLACK SWAN) and Melissa Leo (THE FIGHTER) deserve kudos for laying it down as unflinchingly as they did. And who will ever forget the mother played by Jackie Weaver in ANIMAL KINGDOM. Her full malevolence takes a longer time to discern. The mother in MOTHER was no pushover either.

Fathers don't seem to carry the same weight in films. Maybe toxicity is a bit less lethal when you don't traverse the birth canal.

Who is your favorite lethal mama in literature or film? No one did it better than Joan, although that was real life rather than reel life.
Posted by pattinase (abbott) at 9:00 AM

Mommie Dearest was a beaut of a turn. Carrie, White Heat, just off the top of my head.

Yeah, it would be Joan Crawford as portrayed by Faye Dunaway.

Since I haven't seen any of the new ones I can't judge them yet.

I did love Angie Dickinson in Big Bad Mama, a true classic, though that was more humorous than evil.

If you want evil, I'm going with Angela Lansbury in The Manchurian Candidate.

For sheer insanity there is the mother in Sybil or Piper Laurie in Carrie.

I was going to mention WHITE HEAT too, Paul.

BLACK SWAN reminded me a lot of Carrie. Angela Lansbury might be at the absolute top of the list.

I thought Melissa Leo was fantastic in The Fighter.

Patti - Oh, yes! Toxic mothers really do capture our imagination in the way that toxic fathers don't. I have to go with Angela Lansbury in The Manchurian Candidate, too...

Perhaps because we expect mothers to be nurturing.
Melissa Leo is just an outstanding actress-Frozen River, Treme and Homicide-all different parts and all great. The acting made the movie.

I think this myth of the Mother Who Caused It All stems from the fact that, traditionally, we don't expect fathers to be real parents, and so women are reminded of and kept in their place by being instilled with a deep and abiding fear that if they aren't perfect mothers (whatever the hell that means) they will ruin their children's lives. Michael Chabon has a good riff in MANHOOD FOR AMATEURS when he talks about what it takes for a man to be called a "great dad" (shopping for groceries while minding his kids) and what it would take for a woman to be called a "great mom" (buying all the items on the list while saving one child from fire and performing emergency tracheotomy on the other in the line for the cashier). So I pretty much abhor the movies that take seriously the Evil Mother theme, unless it's done with a very strong level of tongue-in-cheek campiness.

The good ones have all been mentioned. But I would include Amy Ryan in Gone, Baby Gone and Mimi Rogers in The Rapture.

I guess my question is, why should mothers be exempt? We have bad cops, bad priests, bad fathers, bad teachers, bad whatever-societal-role-you-can-think-of. We all know there ARE bad mothers, and some horrible mothers. No reason they shouldn't be fodder, too.

Anjelica Huston as Lilly Dillon in THE GRIFTERS. Lizard mom to be sure.

How quickly we forget. Great one.

Livia Soprano in THE SOPRANOS.

How could I have forgotten Mama Soprano? Great choice.

And BLACK SWAN's mother is a very tired stereotype of the Stage Mother, as I mention elsewhere today, though Barbara Hershey's performance does almost save it (some stacked decks are simply piled too high). Olivia is onto something.

But, as I also hint if not blatantly state elsewhere, male filmmakers are frequently ready to suggest that the women are likely to be victimized by other women, while the male characters around them are Often So Well-Meaning. Even the manipulative bastard near the heart of BLACK SWAN is eventually shown to be far closer to noble than the protag's mother...

I didn't see her as the typical stage mother as much as a controlling mother. She was as much interested in keeping her daughter in that apartment and infantilizing her as seeing her on stage.
In the Wrestler, the main character is victimized by his need to succeed much like Nina is here. I think it's more about what striving for perfection does to certain personalities than anything else. Both pay the ultimate price.

Perhaps the "bad mother" is more interesting than the "bad father." If a father is bad, it's usually in a physically/sexually abusive way, which is awful, but doesn't allow for much in the way of nuance. Whereas, bad mothers are more insidious--the abuse is often of an emotional, rather than physical, nature. Also, a mother can be "bad" by being too attentive and smothering.

Interesting take on it, Deb.

Well, by keeping her infantilized, she furthered her erasure of boundaries with her daughter...which is what all Stage Parents are about. What about me, Miss Gypsy Rose Lee?

I don't think the BLACK SWAN mother paid an ultimate price...unless that was being rejected by her avatar.

FWIW, the Bad Father is often more insidious than the rapist thug of, say, CHINATOWN or even the childish goon of THE GREAT SANTINI.

Good one, Bob. I haven't thought of her in years. TV Moms who aren't the center of the show don't come off well on the whole though. George's Mom on Seinfeld, Diane's Mom on Cheers, two more examples.