Doesn't seem to be a way to cut the size of the font. Sorry. 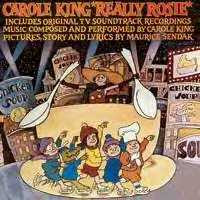 REALLY ROSIE, Music by written and sung by Carole King, story by Maurice Sendak based on his books.

Perhaps because I was already a Carole King fan, and this came along at the moment when my kids were ready for it, this is one of my favorite all-time albums. (Yes they were still albums then). This was from an era when children's movies, TV shows, and music was scant.

REALLY ROSIE was a musical, a TV show, an album, but first of a series of books.

The musical is based on Sendak's books: Chicken Soup with Rice, Pierre, One was Johnny, Alligators All Around (which comprise The Nutshell Library: The Sign on Rosie's Door (1960). Sendak based the story on a theatrical little girl he knew as a child.

The story takes place on a summer day in the life of a group of several neighborhood friends, including , Alligator, Johnny, and Chicken Soup (from the Nutshell Library books), and Rosie and Kathy from The Sign on Rosie' s Door. Rosie who loves on Brooklyn's Avenue P, directs and stars in an movie based on her life. The quality of Sendak's illustrations and story and King's music made this a winner at the time.

A half-hour television special (animated) aired in February 1975. It was directed by Maurice Sendak, with Carole King voicing the title character. An album based on the songs by King and lyrics by Sendak is still around. A production, directed opened on October 14, 1980. It ran for 274 performances. But it is the music that reverberates for me. Both King and Sendak are still alive. King is on tour with James Taylor. Sendak, now 82, published his first pop-up book in 2006.

We knew all the songs from Really Rosie by heart. I still do.

Patti - I remember Really Rose! How very cool that you brought that one back for me : ). And I've been a Carol King fan for a very long time. Great choice for Forgotten Music.

Yup. And they're still albums, too...at least till the last CD rolls out of a recording device. MP3s and other electronic files might finally put paid to the term that arose, iinm, becuase multiple 78s were bound together for longer works...my 3-disc (!)RHAPSODY IN BLUE for example.

I mentioned THE POINT over at Scott's blog...and FREE TO BE, YOU AND ME strikes me as another children's one-off from the era with some memorable music associated with it...

Boy, this brings back a ton of memories, Patti. And, I had forgotten all about this album. Great choice!