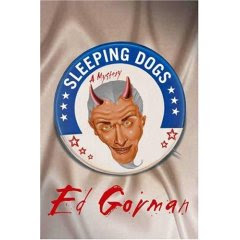 Yesterday I mentioned this book in a meme. Last night, I decided I wanted to say more about it than the five lines that challenge allowed.

Most books about politics tend to be thrillers. A quiet, incisive meditation on the seductiveness of political power, the people it attracts, and the way it all plays out is unusual. But Sleeping Dogs by Ed Gorman is exactly that. No plots to blow up the White House unfold; no bio-terrorists loom. Instead, this novel looks at an Illinois Senate race from the perspective of political consultant, Dev Conrad, an operative who’s realistic about what politicians are like. Dev stays in the game though it often sickens him. He’s good at it, and on some level, he likes the political arena, always hoping to find a politician he can promote for more than a paycheck.

Sleeping Dogs has a cast of characters that turns out to be multifaceted and complicated. No one is exactly what he/she first appears to be. In Sleeping Dogs, the actions are in proportion to the actors, each scene inexorably follows the one before it.

I hope we run into Dev Conrad again, working for a politician he can like. One of the most interesting questions posed in the novel was this: what do you do if you like the voting record and the political stance of a candidate, but not the person him/herself? That’s a question we need to think about. This was a terrific book.

Loved this book. Gorman said it's going to be a series. At least a 2nd book.

I hope so. It was so refreshingly written. All substance, smarts and heart.

... what do you do if you like the voting record and the political stance of a candidate, but not the person him/herself?" --- I say, you vote for the candidate, unless there's a character issue ...

Will have to give Gorman a try