HOW I CAME TO WRITE THIS BOOK: Dana King, A SMALL SACRIFICE

Note - four of Dana's books, including this one, are currently FREE on Kindle. It's a bargain! 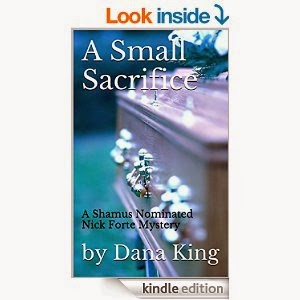 Nick Forte, the protagonist of A Small Sacrifice, is the first character I developed as a writer, before I ever thought of being a writer. He’s been around over twenty years, though he only became available for public consumption when he appeared as a “guest star” in Grind Joint last fall.

In 1993 I’d given up on a musical career, lost my marriage, had enough of my teaching job—three assaults in two years will do that—and attempted what The Beloved Spouse calls a “geographic cure” by moving to Chicago to, hopefully, start over. Virtually all of my friends at the time were musicians, with a heavy concentration of trumpet players. When I heard grumblings that an audition had been fixed—not an uncommon complaint—I now had a different perspective, and decided to have some fun. I wrote a murder mystery about a private investigator who was a former musician, asked to investigate the propriety of a recent audition,  tongue firmly in cheek. All the characters were based on friends of mine, enough so that they could recognize each other. For the detective’s name, I chose “Forte,” the musical term for loud—these are trumpet players, after all—literally the Italian word for “strong.” I wanted a short first name with some hard consonant sounds. So, Nick.

Nick starred in three workplace-based short stories. I’d show people a previous story and they’d ask me to write one with them in it. It was great fun. The enthusiasm built until I started to wonder if I could write a Nick Forte novel. Two went more or less straight to the recycle bin, a not uncommon fate for first efforts. The third, Frame for the Blues, worked well as a kind of novelty, playing off of Forte’s background as a musician. It came close, but didn’t sell, and I decided to take the character more mainstream.

This was about the time of the Jon-Benet Ramsey murder in Colorado. John and Patsy Ramsey were on every news-related show on television. Their early behavior with the police—not allowing themselves to be questioned individually, for example—had made them America’s suspects. I don’t know of anyone who believed them.

A thought occurred to me: what if they’re innocent? (A decidedly minority opinion at the time.) Maybe they know who the killer is, but they can’t say, for some reason. I cut myself off from any more news or information about the case right there, as I didn’t want the story I was already thinking of to have more than the germ of the original idea to come from it.

A Small Sacrifice begins with a private investigator asked to clear a father’s name by the dead boy’s grandmother. Forte tells her he can’t prove a negative, and no one will accept whatever he finds, but the old woman uses his divorced father’s guilt to get him to look into it. What he finds changes more lives than minds, as the truth remains buried with Justin Mitchell.
Posted by pattinase (abbott) at 7:00 AM

Note - four of Dana's books, including this one, are currently FREE on Kindle. It's a bargain you shouldn't pass up.

Patti - Thanks for hosting Dana.

Dana - Thanks for sharing your story. I really like the way that brilliant twist occurred to you. :-)

I haven't read any of hers. I'll pop over and download one.

He's got an interesting piece up over at Gerard Brennan's place as well covering a different aspect of Nick Forte. You can read it here:

In response to "how I came pot write this book".
Dana use to send us, the trumpet players, original copies of faux reviews of the intrenational trumpet conference which reflected true accounts with a large amount of "inside" twisted humor. It was hilarious. We, the select 6 or 8 I don't know, would make copies and send them to other friends; pre internet/email. This stories got around. We encouraged him to write and get published. The Nick Forte name is probable related to a trumpet player we all know. I still have all the original copies from 1991. I did send them to Dana, as he misplaced them in his moving fro city to city. It always brings a smile, especially the story called "Auditions can be murder" which was perhaps the birth of Nick Forte/ Dave B.?

Russ, you're right: "Auditioning Can Be Murder" was the original Forte story, though Dave is the trumpet player who gets clipped to get the mystery running. I mean, nothing personal, Dave's a great guy, but what's a murder mystery without a corpse?