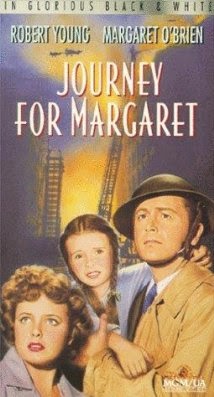 Robert Young and his wife, played by Laraine Day, have lost their child. Robert Young, overseas in the war, comes across some orphaned children. I bet you can guess the ending, although the film is fairly realistic in showing you the damage the kids have suffered. No one was better at playing tragic figures than Margaret O'Brien and here at six, the talent is well in hand. As a child, this was one of my favorite movies. And I would watch it now if it was on TCM.

As great as Shirley was at dancing and singing, Margaret could act her under the table.
Posted by pattinase (abbott) at 8:30 AM

I'm with you on Margaret O'Brien. Very underrated actress.

She was known for her crying scenes, of course, but I always liked her as the mischievous Tootie in MEET ME IN ST. LOUIS. She won a special Oscar for the role, in which she sang and danced with Judy Garland.

I always loved this story! Thanks for reminding me of it.