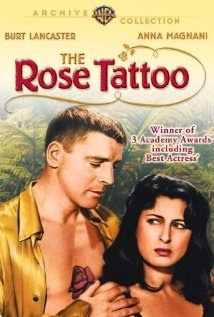 I had been meaning to see this film for years and Friday night seemed as good a time as any. I had very mixed feelings about it. Of course, Magnani is magnificent. Her performance manages to be both natural, fiery, and poignant all at the same time. Some of the scenes work so well. But with the introduction of Burt Lancaster, who I usually love, the film goes awry for me. His acting is so over the top that I have to assume he was directed to play his character this way.

Briefly the story concerns a Sicilian family living in the American South. When the husband, the love of Serafina's life dies in an attempt to evade the cops, she is inconsolable, quite mad with grief. It is not until Lancaster comes along that she comes out of it. There's lots more too but that's the general plot.

I have never seen so many women dressed in slips. I have to assume either this was true in the South before AC, true among Sicilian women, true for the mid-fifties or a signature of Anna Magnani.

Directed by Daniel Mann who also did the similarly over- the- top COME BACK LITTLE SHEBA, I think taking it down a notch and bringing it off what felt like a stage production would have strengthened it. Too often it felt like characters tossing dialog in a enclosed place. The outdoor scenes were terrific.
Posted by pattinase (abbott) at 7:00 AM

For whatever reason, the MAD parody of this has stuck in my mind for over 50 years, while I've pretty much forgotten the movie itself.

Ooh, now I want to see that. I bet it was better than the movie,

Somehow, I've missed THE ROSE TATTOO. I'll check out a copy at my local public library.

Back when anything Tennessee Williams touched would turn to gold. I understand he wrote this specifically for Magnani--and, as you say, she's wonderful. Lancaster is playing the role-reversal sex object here, so I think it was a bit of a thankless task to begin with, but he goes waaaay over the top. It's as if he and Magnani are in different movies.

And speaking as someone in the New Orleans area whose air conditioning was on the fritz for three days last week, it is miserable here without a/c!

I know there's a band called Rose Tattoo. NEver heard of this movie, I don't think.

Yes! Another fifties movie subverting the natural order of things by making the male character the eye-candy!

It was the 50s idea of "adult"--suppressed sexuality, melodrama, women in slips. PICNIC is actually a good comparison. Both by writers who not coincidentally were gay men.