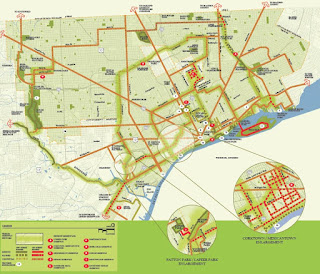 Detroit actually has two cities inside it. Highland Park and Hamtramck. Hamtramck, traditionally Polish, has become a vibrant community for many ethnic groups today.

Hamtramck's non-motorized transit plan -- think pedestrians and cyclists -- has been seven years in the making but city officials expect to see some tangible rubber hit the road later this year.

Hamtramck is working with collaborative-design-studio livingLAB to finish the plan this year. The end result will be designs for more and better pedestrian paths, the groundwork for connecting Hamtramck to the Dequindre Cut and 25 miles of bike lanes.

"This would be all new bike lanes installed throughout the entire city," says Jason Friedmann, community & economic development director for Hamtramck. "The goal is to be done by next fall."

Hamtramck's new bike lanes would be along its major commercial corridors, such as Conant, Gallagher, Holbrook and St. Aubin streets, along with Hamtramck Drive, which circles the General Motors Assembly Plant. City officials are still debating the feasibility of putting bike lanes on Jos Campau because of already tight space for vehicles and pedestrians.

Friedmann says the non-motorized plan will make the city eligible for funding for the installation through the State of Michigan. He also hopes it will open Hamtramck up to more funding to extend the Dequindre Cut north from Eastern Market to the city, a stretch of about 3.5 miles.

How are things in your neck of the woods for transportation other than motorized ones? Detroit has been lagging behind and in fact, there is no safe place to ride a bike in my community.But things are improving day by day. Yay, Detroit!
Posted by pattinase (abbott) at 10:00 AM

This is actually a big deal in Brooklyn, as vocal hipsters and others (most of whom do NOT come from Brooklyn) have been very vocal in pushing for bike lanes, usually with Mayor Bloomberg's support. This has meant less space for cars and blocks and blocks of mostly empty bike lanes.

It depends on the neighborhood. We have bike lanes by us but also have a more suburban feel than downtown and more room to ride safely even on streets without bike lanes. Nevertheless you are taking your life into your hands if you ride on the major avenues.

Where we live, there are no bike lanes. And the lake interferes with there being any.

Like Detroit, the Buffalo area is really two very different worlds. Thousands of abandon houses rot in Buffalo. The City is tearing them down, but it's a slow process. However, NY State is investing $1 billion in Buffalo's "Medical Corridor" and that is generating some urban renewal. The suburbs vary in what they offer. We have bike paths, but many places don't.

Big biking city here. Chicago has an organization that works with the city to make certain streets safe for bikes and to add bike lanes. Unfortunately, some ignoramus drivers fail to recognize the bike paths and cnan be seen usisng them as illegal ways to pass cars. I think most motorists are indiffenret towards bicyclists here whether the street has a bike lane or not. Apart from what I think is a very high incidence of unbelievable reckless and traffic law scoffing drivers we have a lot of unlicensed uneducated drivers in our city, too. Also, like any city with a high percentage of bikers there are also a small per centage of those bicyclists who are traffic defying a--holes who act as if every day is a race weaving in and out of traffic, riding through red lights and causing more problems than the reckless motorists.

Best biking city I have ever visited is Minneapolis. There are long distance bike lanes completely separate from the streets. They look like they were salvaged/converted from old railway lines. They're some of the best I've ever seen anywhere in the country. The bicycle path signage is much better than Chciago, too.

Minneapolis is one city I have never been to and hear great things about.

Portland is HUGE bicycle city. Bike riders here are vocal, demanding and mostly get their way. There are bike lanes, bike paths (not the same thing at all!) special parking areas for bikes, special bike-only streets and zones. There are bike lanes on the seven bridges linking downtown with the east side, bikes are allowed on every walking path except a very few in nature-centric "natural" park areas, and the pedestrian has better beware.

The problem is, the bike riders then proceed to ignore the traffic laws, such as running red lights and stop signs, riding in the center of the car lane or elsewhere outside of the bike lanes, sometimes getting aggressive and acting snotty.

So it's a mixed bag here, but pretty much, bicycles rule. There are more bicycle riders per person here than just about any U.S. city, it seems.

I was going to say what Rick said. I know my brother used to bike several miles to work daily.

I know little about Detroit except that my uncle and his family lived in Highland Park (if I recall correctly) but did so only because of his employment; he would have rather stayed in Pittsburgh with the rest of us.

I do, however, think the irony is too rich for words: Intensified interest in transportation avenues for anything that is not a motor vehicle in Detroit. Amazing! Isn't that a bit like being a vegetarian and working on a poultry farm?

Postscript: We have a growing number of miles dedicated to bike lanes where I live, but cyclists often persist in riding in the car lanes. Dumb!

When we lived in Amsterdam, bike riders rules, followed by trams. Pedestrians didn't stand a chance.

FYI, no bike-paths in Iceland. I wonder why!

Postscript: And where I grew up--western Pennsylvania among coal mines and steel mills--bike-paths and hiking trails have replaced out-of-use railroad right of ways. The trains are no longer needed to haul coal from closed mines to closed mills. For my money--no pun intended--I think things were better off there before the bike-paths and hiking trails. Those trains, that coal, and that steel represented food on tables and roofs over heads. Now, the lycra-clad leisure class rides, walks, and jobs, and they remain clueless about the former vitality of their communities. Sad!

PS: Make that "jogs" rather than "jobs." Perhaps that was some sort of Freudian slip on the keyboard.

That non-motorized plan sounds pretty interesting. Maybe the wave of the future.