Say Something Good About Detroit: MLK in Detroit 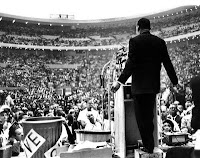 These photos were taken on Sunday, June 23, 1963. On that date, Dr. King and former governor Swainson both participated in the Detroit "Walk to Freedom."
Dr. King was then in the midst of a tour (begun that spring) from California to New York. His Detroit stop proved the tour's biggest success. Police estimated the Freedom Walk crowd at 125,000. The day after the event, The Detroit Free Press labeled it "the largest civil rights demonstration in the nation's history." The walk began at Woodward and Adelaide and continued down Woodward to Cobo Hall. It lasted about an hour and a half, as marchers carried signs and sang songs (Songs included "We Shall Overcome" and "The Battle Hymn of the Republic.").
The Detroit Council for Human Rights organized the Walk. The Council's director, Benjamin McFall, and its Chairman, Rev. Clarence L. Franklin, marched in a line with King and Swainson. That line also included Detroit Mayor Jerome Cavanaugh, United Auto Workers President Walter P. Reuther and State Auditor General Billie S. Farnum. (Then-current governor George Romney, a Mormon who avoided public appearances on Sundays, did not directly participate. He did, however, proclaim the day "Freedom March Day in Michigan.")
At the walk's conclusion, King gave a speech at Cobo Hall. According to the contemporary Detroit Free Press report, approximately 25,000 people sat in attendance, with African Americans comprising about ninety-five percent of that total. They listened as King spoke of non-violence and an end to racial segregation. The June 24, 1963 Free Press report notes that King "ended his speech by telling of a dream." According to the Free Press, King described his dream of whites and blacks "walking together hand in hand, free at last."
In his book King: A Biography, David Levering Lewis states that King repeated the phrase "I have a dream" several times during that Cobo Hall speech. Lewis notes that when King addressed a crowd in Washington, D.C. two months later, he "kept the refrain from the Detroit speech: I have a dream." (See Lewis' King: A Biography, second edition, Urbana: University of Illinois, 1978, pg. 227).
King's Washington speech of August 28, 1963 became famous as his "I have a dream speech." It was a defining moment in the American civil rights movement. In one sense, however, the seeds of Dr. Martin Luther King, Jr.'s dream were planted in Michigan - in Detroit's Cobo Hall
Posted by pattinase (abbott) at 10:00 AM

I have heard quite a lot about the Detroit Connection with King. Indeed.

The 60s--up to a point--were such hopeful times. Then so many wonderful people were brutally assassinated. I do not think the country has yet recovered.