My Life in the Theater" The Misanthrope 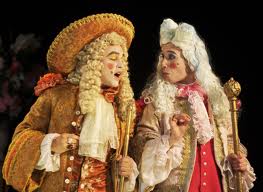 Saw this one at the Attic Theater in Detroit in 1991. I am sure I have seen it several other times over the years. It endures because its themes endure I guess. Or that's what is says in the director's notes. The Attic Theater was such a great resource for Detroit. I am very sad it has never returned.

Lavinia Moyer helmed the Attic 1976-94, through years that saw great promise, artistic success and, finally, financial despair for the nonprofit. The Attic for many years was considered the city of Detroit's most artistically sound resident theatre, but a fire at its Greektown-area location began years of financial instability that saw the company move to various spaces, including a partially-renovated Strand Theatre in downtown Pontiac, MI (1992-94).
The Attic later limped along artistically and financially at a space in Trapper's Alley, in Detroit's Greektown, before presenting sporadically in Pontiac (after being shut out of the Strand by the city of Pontiac).
The Attic Theater Moyer knew -- one of beneficient subscribers and promise and donations and returning artists and Equity actors -- is gone now. Too bad for us.

FRIDAY'S FORGOTTEN BOOK LINKS WON'T BE UP UNTIL AROUND 12:00 EST due to my location.
Posted by pattinase (abbott) at 8:00 PM

We had a wonderful regional theater in STUDIO ARENA THEATER in Buffalo. Diane and I had season tickets for a decade. But the area around the theater deteriorated. We had our vehicle broken into during one of the performances. Then we didn't renew our season tickets. A few years later, STUDIO ARENA THEATER went bankrupt and closed its doors. A sad, too familiar story...

Sounds like the same story. Rust belt sagas. At least you have the Shaw in the summer though!

That is a real shame.

We saw THE MISANTHROPE on Broadway in 1975 with Alec McCowen and Diana Rigg. Can't remember any details at this late date.

Patti, I still haven't written my FFB. However, in case you post the links before I do, my entry is "The Man Without a Country" by Edward Everett Hale (1863). I'll definitely put it up today, Friday, January 11. Thanks very much.

Patti - You always choose the most interesting plays for this feature!