February 17th is Donald Westlake Day to celebrate the publication of his last book, THE COMEDY IS FINISHED, by Hard Case Crime. If you don't regularly review but would like to do a Westlake novel for this occasion, just let me know and I will link to your blog or publish it here.

Ed Gorman is the author of the Sam McCain series and the Dev Conrad series along with many other books. The latest BAD MOON RISING is right here.

Mike Resnick is one of science fiction/fantasy's great storytellers. I've been reading him for thirty ye

ars and I have to say he gets more accomplished and polished every time out. In addition to being a fine writer he's a fine idea man. I'd compare him to Max Allan Collins and Bob Randisi in crime fiction. The three of them have more good ideas before breakfast than I have in a week of Sundays. True. Alas.

Resnick's fiction is generally robust in its narrative but almost always thoughtful. He can take the tropes of action fiction and instill in them the themes of more reflective work. One of my favorite examples of this is his novel Walpuris 111. In form it's a thriller. An assassin named Sable is hired to kill Conrad Bland a man who has turned genocide into an ugly art form. He has practiced his talents throughout the Republic of planets and is thus sought by everyone.

The planet Jericho lands on has been settled by Satanists (planets can be settled by every kind of group) who protect Bland because they believe him to be the Dark Messiah (he will of course murder all of the before he eventually leaves). This is where Resnick shows his true mastery.

Jericho, the most successful killer in the galaxy, is pitted against John Sable, the police chief of the city where Bland resides. Sable is straight out of Joseph Conrad, a man who has become accustomed to enforcing the political agenda of his planet. He has long felt conflicted about his duties and his own morality. Now that he is faced with the assassin he begins to wonder--does Bland deserve to live? Is Jericho just a killer or a savior?

The cat-and-mouse of killer and cop drives the book but it is the moral dilemma that enriches the book. Mike Resnick always gives his readers a terrific story and many times, as here, he takes on themes that have bedeviled mankind for its entire history.
A knock-out read and chilling look at evil. 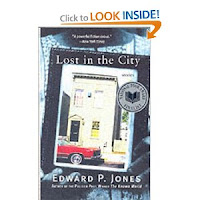 I am thinking a lot about short stories just now because I agreed to read 365 stories this year. And as I rummaged through the endless story collections I own, I found this one.

LOST IN THE CITY was published in 1992. The stories take place in Washington D.C. but not the one we usually think about. These are stories about people who drive a cab, clean houses, take drugs, get killed. They are as dark as any story you will read although Jones always remembers to buttress his grimness with irony, humor, gentleness. These are at heart stories about people who are making ends meet.

This collection won the Pen-Hemmingway Award but not enough money to make Jones' feel he could give up his day job.

Ten years go by and then he publishes THE KNOWN WORLD, which wins a slew of prizes. It's about a black slave-owner. His next work, AUNT HAGGAR'S CHILDREN, is his third book and another collection which harkens back on minor characters in his first book. For a good article on Jones, go here. But if you want to see a natural writer at work, someone who knows just what detail to include, how to write dialog and how to weave a plot, how to say something in a story, look no further. He's your guy.

I read some very early Resnick (Redbeard) and found it pretty average. I know I've heard how good his later books are but I've just never started reading one. I have a couple. I should definitely give his later work a try and thanks for keeping me cognizant of his work.

The Westlake title is THE COMEDY IS FINISHED, not Over.

I goofed on the scheduler for the post. It's up NOW.

I was never a big science fiction reader, but a friend who was a Resnick fan and correspondent told me the premise of Walpurgis III back in the mid-Eighties, and I had to find a copy. I devoured it in two days and loved it. It reads, as you say, like a thriller, but there's a great deal more going on beneath the surface action.

After reading it, I wrote to my friend and asked him to pass along my positive comments to Resnick the next time he wrote to him. A couple months later I received a letter from Resnick himself, and that started a correspondence that continued for quite a few years. (We still exchange e-mails once in a blue moon.) It's probably needless to add that I read and enjoyed a great many more of his books. Favorites include, besides Walpurgis III, The Dark Lady and Kirinyaga.

I'm on, Patti. Better late than never. I seem to be having tons of trouble keeping up these days.

Feeling a bit under the weather.

Mine is up at last -- THE FLOOD by John Creasey. My computer has been dying a very slow death and that has affected my posting. Sometime this month I will get a new computer and all will be sunshine, lollipops and roses.

Charles--Resnick isn't so happy with his earliest work, such as REDBEARD, either.

Patti--Oh, Jones's DC is certainly the one I knew, and it won't be too unfamiliar to Pelecanos fans.

He is masterful in this volume. Haven't read Hagar though.

I've got one up this week too, finally. Can you please include it?

Have lost in the City on the bookshelf. Will have to pull it down and take a read.

I tried posting a couple hours ago, but it looks like it didn't go through.

I'd love to participate in Westlake Day!

My post will be anchored with GOOD BEHAVIOR, but will be more of a general appreciation.

Great, John. Just tell me where to find it unless you want to post it on here.

It'll be on my blog, CAPTAIN SPAULDING ON SKULL ISLAND: