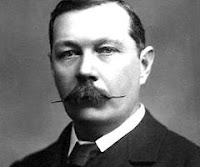 Quarterly
The one and only. The late and lamented. The standard by which all other non-fiction mags are judged. This quarterly was around forever (or at least since 1967). It began as a mimeographed newsletter by Allen J. Hubin, spent a few years under the sponsorship of the University of California, and eventually found a home with Otto Penzler, as part of his Mysterious Press. The journal of record for the entire genre. A bit stodgy at times, and it was usually out of date by the time it finally came out, but back issues are well worth hunting down. It's still recommended, and it is still missed.(From THE THRILLING DETECTIVE SITE)


In 1984, a reader's survey by THE ARMCHAIR DETECTIVE listed these authors as their favorite in order of preference:

With a couple exceptions, it holds up pretty well thirty years later. But who would you add; who would you take away?
Posted by pattinase (abbott) at 7:00 AM

I wouldn't necessarily take any writer off the list, but my guess is Crispin and Carr might come off the list simply because their works aren't as frequently read today as they might have been a quarter century ago. I'd guess some newer writers, such as Elizabeth George, Sophie Hannah, or one of the Scandinavian writers (especially, right now, Stieg Larsson) would claim a spot.

All should remain on the list. Problem is the list is just too darned short -- it should be ever-expanding.

Current favorites of mine are

I notice this is a testoterone-laden group, so let me add

Strange how the women on my list are all deceased...

Patti - Interesting list! I'd certainly agree with a lot of them and perhaps add Michel Connelly, too.

I think Spillane has been sufficiently rehabilitated to make the list. Westlake and Block for sure -- odd they didn't make the list in the 80s but maybe thy were still too, well, you know, young at the time.

Wilkie Collins is an interesting question, isn't he? I mean he is certainly a "father" of the genre. But you only think of two books.

I wonder if this was done in England. Seems weighted that way. The list is pretty good, although I'd put John D. MacDonald much, much higher.

Michael Connolly would be my addition, too. I like Tess Gerritsen (to represent the ladies :-), and James Patterson and Sue Grafton should probably be on there for simple popularity.

Would be interesting to see what a poll would tell us today.

Off the top of my head I would add Michael Connelly,Donald Westlake, Lawrence Block, Ian Rankin, and George Pelecanos.
Certainly not add James Patterson who altho popular is a terrible writer or Spillane who I never liked.

Somebody mis-capitalized Ross Macdonald...you know, apparently Westlake and Hunter/McBain would've left Chandler off the list, and I'd certainly leave Hunter/McBain off mine...among those I like a lot who've not yet been cited are Marijane Meaker (Packer/etc.), Patricia Highsmith, Marcia Muller, Robert Bloch, Cornell Woolrich, most of the Gold Medal gang aside from Meaker, such chronically overlooked folks as Jack Ritchie and James Holding and C.B. Gilford, and as I read more of her, Ed Gorman's old fave Elizabeth Sanxay Holding is not just holding steady but rising...

The Cain boys and some of the other BLACK CAT/DIME DETECTIVE mainstays are missing so far, too...Horace McCoy, Fredric Brown, et al.

Patricia Highsmith, Ed Gorman and David Goodis should be on this list.

I guess favorite and greatest are two different lists. My favorites might be mostly contemporary but the initial list is pretty solid for greatest. With a few exceptions, that is.

Nah. It's just that what are the most influential are often the favorites. "Greatest" is just obfuscation. The bottom half of the 1984 list is filled with important but still not epochal folks who were flavors of the previous decade or so...Robert Parker being an obvious example. You want to argue that he's "greater" or even more influential than JDM?

Likewise, Dick Francis--excellent...but not nearly as important to the field (in influence, at least) as, say, Sayers or Carr or JDM.

A writer could be very influential but no longer read. Todd is listing a few writer's I have yet to read.

His books were too narrow for me at the time. Although LUCK may change all that.

The thing that amazed me was that I had read at least one book by all but three of these writers. If you read a book a week, you read a lot of books over fifty-plus years or so.

Or, once-influential (if no longer read, though there are only so many that hit both bells). Or, even, negatively influential, of course. "Great," unfortunately, tends to be too vague unless qualified, and too often thrown around to "I've certainly heard of Wilkie Collins but never bother to read him..."

I have read a book by all the authors on the first list and many by most of them. All of Christie for instance. All of Sayers, Mcdonald and most of McDonald, Rendell, Stout.

Remember, this is FAVORITES (mine here)
I'd remove:
Carr
Francis
Queen
Crispin
Marsh

Oddly enough, I've read at least a single book by all but Crispin, Lathen and Tey (though I've been meaning to get to Tey's novels for years), though I believe I've read something by all. I've read about half the MacDonald I'm aware of (most of that made up of McGees), most of the Macdonald published under that name, though I still have some Hammett to read (aside from the early SMART SET stuff and other most obscure bits).

Good ones, Rick.
I read the MOVING TOYSHOP (?) by Crispin, which I remember liking but not the plot at all. I love Tey. Read the one about the two sisters who keep a young girl prisoner (Brat Farrar, perhaps.) I have a lot of Hammett to read. Read all the McGees but not much else. Lathen, I wouldn't worry about.

Looks like a decent list to me, from what little I know about crime writing (aside from history stuff).

I've read all of Crispin and Tey and most of Lathen but I'd remove all of them, along with Parker (I know, but he's my bete noire) and possibly Marsh.

Are you asking whom we would put on our own favorites list, or who you think would show up in a similar survey today?

I like the suggestion that Mickey Spillane might be sufficiently rehabilitated to make an updated list, and he could take Ian Rankin and Ken Bruen with him and, alas, Stieg Larsson.
==================================
Detectives Beyond Borders
"Because Murder Is More Fun Away From Home"
http://www.detectivesbeyondborders.blogspot.com/

I think who would show up on a similar survey today. Who would be the favorite writers of the general crime fiction reading public?

I doubt Larsson will survive the decade. Just not that good on a more distant reading. I agree with Rankin and Bruen. Bruen has the most distinctive voice in crime fiction.

Dick Francis does seem to be the one to obviously leave off today, and maybe emma Lathem too. I would add Margery Allingham and Bill Pronzini in their place and suggest the addition too of Patrick Quentin and Craig Rice. Unlike Todd I have a lot of time for Ed McBain but there are a lot of Noir authors that deserve to be included, such as Woolrich and Fredric Brown. I am not at all convinced about the rehabilitation of Spillaine, so maybe if that were a necessary 'slot', then maybe why not go for James Ellroy or Daniel Woodrell? I would also want to include espionage authors such as Len Deighton, John le Carre.

As Rick was quick to reinforce, the initial list and his are both tabbed Favorite (and both lists share JDM and RMac)...any list of The Most Important is ridiculous to not include Poe.

For me, I've never read a Lombino/Hunter/McBain/Cannon/et al. story that didn't have a big galumphing unbelievable dumb in it somewhere. Not as confoundingly as with the Deavers I've read, but far too blatantly for me to enjoy the work on balance.

Ross Thomas is an example of a guy who would probably have been ahead of Francis on a 1994 Favorites list, and vanished again on one done yesterday. Carl Hiaasen would have "his slot"...

Rex Stout (and I hope it gets through this time).

If this list was conducted today and it was a public vote then a bunch of airport shelf fillers would probably be in it, especially if done via social media where twitter etc would mobilise votes. I would therefore expect to see the whole list dominated by stuff published in the last twenty years, with a few classics left in. So Patterson, Cornwell, Reichs, Larsson, Connelly, Ellroy, Leonard, Mankell, etc. This is what happens with favourite songs/artist polls these days.