Patrick O'Leary's first novel, Door Number Three, was chosen by Publisher’s Weekly as one of the best novels of the year. His second novel, The Gift, was a finalist for the World Fantasy Award and The Mythopoeic Award. His third novel, The Impossible Bird, made the shortlist for the Nebula Award. Other Voices, Other Doors was his first collection of fiction, essays and poetry. O’Leary’s poetry was chosen for the The Year’s Best Fantasy and Horror 17th Annual Edition. His short stories have appeared in Postscripts, Mars Probes, Infinity Plus, Sci Fiction, Talebones, Imagination Fully Dilated 2, The Infinite Matrix, Electric Velocipede, and Conjunctions 39: The New Wave Fabulists. His novels have been translated into German, Russian, Japanese, Polish, French and Braille. Until recently he was a creative director at an advertising agency. His work has won numerous industry awards. He makes his home in the Detroit area.

Next month, a new volume of his short fiction THE BLACK HEART is being published by PS Publishing in a limited edition. You can visit his website here.

Patrick was born in Saginaw, Michigan and moved to Detroit early on. He worked in the advertising field for many years. He wrote the poem "Nobody Knows It But Me," which was used in in a 2002 advertising campaign for the Tahoe and recited by James Garner. This has been widely used in weddings(and funerals) ever since.

On the eve of his new publication, Patrick answered a few questions.

1) Why horror/fantasy/science fiction? Was that your genre of choice as a
young reader? Were you surprised when that was how your books were

defined by the public or did you specifically write to that audience?

Well, no. I was and am pretty aware of genre. I just have no compunction to condescend to it. Weird literature is a very natural fit for my brain. In fact, there is almost an SF mindset among fans, a peculiar slant way of looking at the world which seems ordinary to us who grew up on The Twilight Zone, Star Trek, Tolkien and Creepy Magazine. We recognize each other immediately when we exchange the secret code words.
"

Fantastika" (as John Clute has dubbed it) is the most inclusive and expansive of fiction modes. It contains a broader palette of life, a larger vocabulary of imagination, if you will. It has been something of a mission of mine to disregard boundaries of presumption and to describe the world as I see it. It is passing
strange. I think the only way we can deal with it is by saying it's
just a dream, or a horror, or a fantasy.

2) Who did you read as a young man? Who do you read now? Who should we be reading?

I was introduced to literature by the Little House Books of Laura Ingalls Wilder (co-written, we've learned since then with her daughter Rose Wilder). I was a lonely boy who had just moved from a 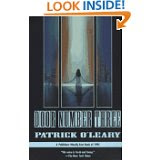 n idyllic country home to the Big City of Detroit. This traumatic voyage into a new and awful world turned me into a reader, and I sought refuge the hearth tales of a warm pioneer family who seemed to move into new territories of danger and dismay ever year, every book (Blizzards/ blindness/Indians/crop failures). One mustn't underestimate initial gateways into literature.

From there I moved naturally onto Salinger, Hemmingway, Kael, Greene,
Waugh, Spark, Doctorow and poets like Berryman, E.E.Cummings, etc.
I've just discovered Kage Baker--a superb SF/fantasy writer. I love the poetry of Mary
Oliver. The songs of Van Morrison. And the literature of Gene Wolfe. I think we ought to be reading Kevin Brockenmeirer, Ono no Komachi and Octavia Butler. A list of my favorite books is on the webpage. http://web.mac.com/paddybon/

3) How do you feel about the little magazines in the fantastic- fiction field that you have contributed to? Is the future of most genre writing in such publications. Where is the best writing taking place right now?

Surprise. I am most grateful to the magazines who've accepted my work. I haven't the faintest idea where the genre is going. Could anyone have predicted Obama 5 years ago? Why should literature be any different?

4) Tell us about your new book of stories?

The Black Heart is a collection of strange new stories and stories excerpted from my three novels. Jim Morrow wrote a wonderful introduction which in my weaker moments makes me feel truly bad ass. Some are SF. Some are fantasy. T

rust me: on any given page you will
have no idea what happens next. Let me quote myself from the cover flap. "The Black Heart is a collection of Patrick O'Leary's newest stories. Here you will find aliens and apocalypses, God and Satan, witches and geishas, madonnas and mutes, birds and bears, zoos and prisons, weeping robots and knights who work in hardware, pardons and orgasms, men without legs and aliens without hearts. In short, pretty much your standard O'Leary stash..."

5) Has Detroit/Michigan informed your writing? It seems to me that fantasy writers are probably less influenced by where they live than other writers? Is this a misconception?

Our black cat with green eyes keeps coming to the window and yowling through the screen, I'll be damned if I'm going to let him in. There is roughly 15% unemployment in Michigan. I am unemployed.

6) What’s next for Patrick O’Leary?

A collection of translations of the poetry of Ono no Komachi with woodcuts by my wife, Sandra Rice. A new collection of poems is out and about. I remain paddling on a fantasy novel I began in 1998.

7) What, as teachers say, are you trying to do?

I am not trying to do anything. I am doing it, but way too slowly. Let me start again.

Let's say you've never been kissed.You are standing in the corner of a gymnasium watching other junior high kids slo-dance in the semi-dark, A black man in a white suit with a white fender electric comes to the stage and mimes his as yet unhead of hit: "Sunny." Some manager thought playing school sock hops was the way to drum up interest in his career. In the corner are the chaperons: the coach who whipped you with his lanyard. The black man who taught you social science. Over there is the football star who peed on you in the showers as a joke. And this is a middle class, ordinary high school, one year after the Beatles broke. See that strobe light. That girl over there doing the pony with the ironed-flat bangs and the green miniskirt. She doesn't know you love her. She will never know you love her. The DJ plays The Rolling Stones singing, "This could be the last time. This could be the last time, MAAAAY be
the last time I don't know. Oh No."

That's what I'm trying to do.

Trying to put words to Patrick O'Leary's novels is practically a futile exercise because they are that rare thing in fiction, true originals, containing savage acts of imagination and bolded,
underlined and emphasized transmissions from the heart.

His work is literally unlike any others out there. At it's best his work has beauty, elegance, grace and maybe a touch of the divine. He's one of those writers that you wish was more prolific but you're glad he's not because it might dilute what he's doing.

What further proof do you need then these two examples

1) The man who hypnotized his whole fourth grade class into believing
they were invisible. Leading them in a chorus countdown in the Saginaw
Museum’s science wing.“Five! Four! Three! Two! One!”

And suddenly the beautiful feeling of being safe. Truly safe. Nobody
watching. Nobody seeing. His science teacher Mrs. Brown and the field
trip chaperons, lined up by the frosted glass door. Their eyes closed,
their smiles benevolent. All his classmates quiet and crowded
together, smiling guilty smiles.

One boy touching himself through his corduroys.

One girl reaching out and holding the hand of the boy in front of her.

Mike looking at Peggy Stack’s red pigtails. Finally free to stare
without shyness at his secret crush: her freckled face and blue eyes.
Mike smelling Peggy’s scent: peaches. Dr. Klinder speaking, and though
he stood across the room, it felt like he was whispering in his ear.
“You look like you want to kiss her, Mike. Go ahead.”

And Mike leaning down and tilting his head toward the little girl in pigtails.

His open eyes taking in the white down on her freckled cheek.

The tip of her tongue gently parting his teeth.

Klinder’s red parrot giving a wolf whistle that echoed off the high
ceiling of the science wing.

And the huge tear trickling down her face, interrupting the kiss.

Her sad eyes and her one word. “Daddy?”

I looked at him. “I was remembering something I hadn’t thought of in years.”

“Yeah. Time-blipping does that to ya. Scrapes the barnacles off yer hull”

I nodded. “I was eighteen. Sitting in the den watching a fire. My dad
came home early, or I was up late. Anyway, he didn’t expect to see me.
And he did the strangest thing. He sat down next to me on the couch.
Started telling me these” – I swallowed – “things. Like how proud he
was of me. How he bragged about me all the time at the dealership. He
said he called me his ‘Smart Boy’. He said he was glad at least one of
his boys was going to finish college.”

Saul cocked an eyebrow at me. “What’s so cruddy about that?”

“You don’t understand. I could smell the gin on his breath.”

The little man shrugged. “Wouldn’t be the first time a guy hadta get
juiced to, you know…”

“No”, I said. “That’s not it. He was nervous. Guilty. He was taking me
into his confidence. So I wouldn’t be tempted to tell my mother.” I
saw I wasn’t making sense. “He’d been sober for five years. She’d
threatened to leave him if he took another drink. He was buying me
off.”

“He told me everything a son wants to hear from his father and he didn’t mean a word.”

Check out Patrick's website for a generous sample his Patrick O'Leary's work. He is truly a Detroit original.

I agree with O'Leary about how fantasy and horror and the other fantastic genres reflect what I see really in the world.

What a great MTM post. I have a much stronger sense of Patrick O'Leary. Detroit has definitely produced some writers you don't want to miss!

Great post. Now I have even more material to add to my ever growing TBR read pile.