You can read it here. https://www.jamesleeburke.com/winter-light/?fbclid=IwAR3ExWObQYtL3hN-VAHXvfhwCaiJzSDzlxcMrKV9eqpiKOJ5vQcKXdN1BDc 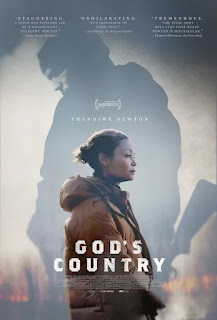 At the Traverse City Film Festival, the founder's prize was given to a film called GOD'S COUNTRY, which was an adaptation of James Lee Burke's story "Winter Light."

In the original story, a professor at a Montana college, newly retired, confronts two townies who are parking on his land as they hunt. The story escalates as the adversaries rev up their game. The story works very well because of the gorgeous writing, the setting, the plot and characters. And the director God's Country originally made a short film, which stuck pretty closely to this original scenario.

But when Julian Higgins decided to go on and make a full-length film of the story, he made many significant changes.He changes the professor from a white retired man to a still -working Black woman (Thandiwe Newton). The woman was a cop in New Orleans before she came west with her mother. Higgins adds a lot of complexity to her character as well as to the hunters. He adds a town sheriff into the mix who is unable to deal with the hunters. Although I liked the story very much, most of what Higgins added made it a more interesting story to me. See what you think if the film comes your way.

I like Burke's writing very much, Patii, so it doesn't surprise me you thought this was a good 'un. I should read more of his short stories.

I think I like James Lee Burke's short stories better than his novels.

I believe this is the first story I have read by him but I will look for more.

What George said goes for me too. I got through one of his novels but he just isn't for me. Shorter doses are better.

I'm reading another British Library anthology edited by Martin Edwards, GUILTY CREATURES. All have animals in the title and the story, from Sherlock Holmes forward, Readable as always. Also reading Emma Straub's only collection, OTHER PEOPLE WE MARRIED. "Some People Must Really Fall in Love" is about a young (27) college English teacher who has a crush on one of her students, based (it seems) mostly on his looks. She debates what to do about it with herself, and with her office mates (though she never tells them how she really feels), and fights the urge to act on it. I like her writing.

Me too. I would like to go to her bookstore in Brooklyn if I ever get to NY again.

It's a few blocks from where Jackie used to teach.

Very promising. I'll even look. on occasion, at the idiotic WESTWORLD to see Newton work, so to see her in a Burke adaptation is a will-do.

I haven't read any bad Burke as yet, but I might agree with George that his shorter stories are better than his novels.

Thanks for including my typically more apparatus (much of it new) than critique entry (a it stands)!

That is an interesting connection, short story to film. I know that are films based on short stories, but it seems that there would usually have to be lots of expansion to make a story film-length.

I should try James Lee Burke's short stories because I don't care for his novels.

I'm a big fan of Burke's novels having read all of them but haven't read much of his short fiction. Will see the movie whenever I get the chance.

They thought it might get a fall release. But it may go straight to streaming.
They added so much to it.

It’ll be in wide release (in theaters) on September 15.

Thanks, Erin. I hope JLB likes it. They were taking it to him after the TCFF,