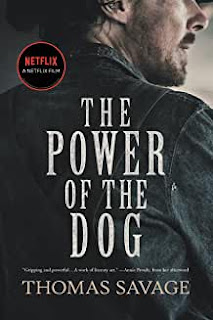 POWER OF THE DOG was a 1967 novel written by Thomas Savage. It concerns two brothers on a ranch in Montana in 1925. They have reached the age when most would consider them confirmed bachelors when the younger, George, falls in love with a widow, upsetting the balance on the ranch. Phil, the alpha male of the family and ranch, is incensed with this and is cruel to both the new wife and her son. Rose starts drinking and her son despairs in how to help his mother. His solution is a drastic one.

I liked the movie of this work well enough to read the novel. We get a lot more insight into Phil especially in the novel.  He is a closeted homosexual who has probably only once been able to act on his desires. So he has turned that love to his brother and can't bear losing him to Rose. Rose is a timid woman but her son who seems to be at first is not. We have four interesting characters here and the author makes us sympathetic to each of them.  Phil may be a monster in some ways but the writer makes him understandable. A great book. Savage wrote many others, which I will seek out.

I've been vaguely aware of Savage for some years...I guess it would take till recently for a big-budgeted film to be likely, given everything. Thanks for the pointer!

I've been wondering what this book was like, Patti. I often find that the book gives a lot more solid insights into the characters than film does, and it sounds as though that happens here.

I have a couple of Savage's books, but haven't gotten around to reading them. I thought POWER OF THE DOG was the best movie of the year.

A close tie between POWER OF THE DOG and PASSING for me.
Exactly, Margot.
I never heard his name before the movie. A lot of his books are available as ebooks for very little.