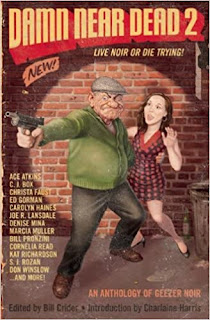 Bill Crider put together this second DND anthology for Busted Flush Press. David Thompson was the publisher and he died from a sudden heart attack at a very young age, maybe even before this came out. It has some terrific stories in it. Bill really had sway in the crime fiction community.

I chose a story by Ace Atkins. I have read one or two of his novels and should read more. He is a terrific writer.

A former detective, known as the rabbit, is on his last trip, outfitted with all the drugs and help he will need to get through the last weeks of throat cancer. He decides to spend the time at a hospice in Florida. So his wife and he drive down to Florida to spend a month appreciating sunsets. But old habits die hard and he immediately notices that something is off about the guy who runs the place. He decides he is mobbed up and there is something off also about all the  gorgeous eastern European women who serve as maids and his coterie. Fatmir dresses like a bad hombre and our detective watches him until he discovers just what his game is.

Now what made this story great for me was that the protagonist was both a tough guy as far as policing went and yet he was a tender guy with his wife, kids and a friend who comes to visit him. Both parts of his personality are in full bloom in this story. And the ending is poignant and fitting to both.

This sounds like a very good collection, Patti, and with Crider at the helm, I'm not surprised. Glad you enjoyed the story.

The first edition was good too.

Both were very good. I've read a few of Atkins' short stories but none of his novels. I should.

After I finished the Fritz Leiber and Richard Bausch collections, I moved on to Antonya Nelson (FUNNY ONCE) and Sara Paretsky (LOVE & OTHER CRIMES). Leiber has some good stories (in SMOKE MONSTER) but has two or three that seemed like long, rambling, 20 page narrations with little point other than an attempt at "atmosphere" that didn't work for me. I liked the Bausch well enough, but not to seek out more of his collections, frankly. Now the Nelson, on the other hand, I really like, and I will definitely be reading more of her stuff. I've read several of Paretsky's stories - as a matter of fact I had just read her very good "Miss Bianca" (included here) in THE BIG BOOK OF ESPIONAGE - and like her at the shorter length more than the novels.

Still no shortage of short stories to read here. I'm up to 143 read this year to date.

Bill Crider is a legend....and deservingly so. I can't wait for the anthology honoring Bill that you're a part of.

This looks like a good collection, Patti. And that story sounds good too. I have not read anything by Ace Atkins but I have some of his early books.

I have the tribute anthology for Bill Crider ordered and on the way.

Me, too. And I got my second shot!