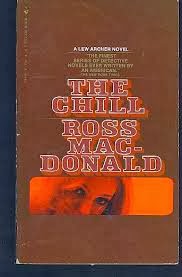 I found reviewing this book exceedingly difficult. The plot is very complicated and stopping at a point where not too many reveals have been mentioned is nearly impossible. So I will err here on the side of telling too little rather than too much.

Lew Archer is hired by the callow youth, Alex Kincaid, to find his new wife Dolly, who has suddenly disappeared. Archer takes the case when it is clear the police are uninterested and he finds Dolly quickly, but of course complications arise.

A man from her past has shown up at their hotel. This and the death of her college advisor, Helen Haggerty, has sent her into flight. She claims, in fact, that she's caused Helen’s death. Archer puts Dolly into a rest home with a man who has treated her in the past for similar incidents. Kincaid hangs around to keep an eye on her.

It seems that Dolly is linked to a number of mysterious deaths over a long period. The dean of the college Dolly attends also figures into the story at multiple points. He is dominated by his mother although puts up less of a fuss than you might expect.

This is very much a story about family relationships and how children can be manipulated by adults. The past has the present in a stranglehold in this book. Try as they might, the characters in THE CHILL are helpless but to follow a path they sometimes had no hand in making. Although many characters in THE CHILL only appear on the page for a minute or two, they are each given the traits to be memorable. Archer himself is the least memorable and I think Macdonald planned it thusly.
My favorite line, and one that sums up much of the plot, is "I'm beginning to hate old women."
Posted by pattinase (abbott) at 12:00 AM

Very nice to see a Lew Archer novel profiled here, Patti. I like his character a lot, and many of the Southern California locations of the novels are places I've been. Nice choice!

I remember binging on Ross Macdonald mysteries in the 1970s. I've gone back and reread several of those Lew Archer mysteries and enjoyed them.

Like this wife, Margaret Millar, his focus was on families much of the time.

THE CHILL was probably his breakthrough book, and definitely one of the best.

I still have a few that I haven't read.

I have one I haven't read but it isn't an Archer.

My problem is, for a period in the late '70s (and into the '80s) I was reading almost nothing but PI stuff for a while. But now, I can't remember the last traditional PI mystery I've read, though there have probably been a few in there.

I wrote this more than thirty years ago:
I had admired Ross Macdonald for his work for years. I can remember the day a college roommate gave me his copy of The Chill and dared me to read a mystery. I read it in a single sitting and was blown away by the intellect that could conceive such a lucid pathway through the maze of human deviousness.

I was a fan. That was enough.

And I saw him there at the conference. Ross Macdonald was tall and stately, stoic and gentlemanly. He wore a straw hat; Santa Barbara was hot that summer. He had buttoned the top button of his short-sleeve shirt; he was elderly. He walked deliberately. He looked unapproachable. Until I saw him with other people. His smile was open and flashing; he was generous with his smiles.

Maybe it's still interesting. Thanks to Ken Millar, I wrote five private eye novels. (Maybe six. I lost count; I am old.) A year ago my last pi novel THE GIRL UNDER THE BRIDGE appeared on Kindle.

Best wishes. And now back to slumber.

Hey, Fred. Hope you are weathering this time. Thanks for stopping by.

That is quite a story, Fred. Shame on MM for treating you both like that.

I'm a big fan of Ross MacDonald and have read all his novels at least twice if not three times. I remember discovering them in the Bantam editions in the early 60's.

Yes, just about all the Archer novels involve family. I have a few I’ve yet to read, and should. But there are so many books!