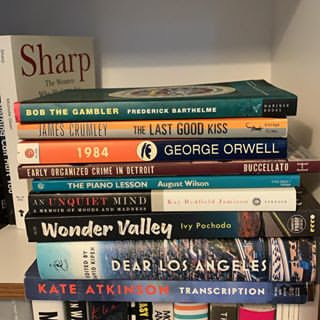 BOB THE GAMBLER: The story of the Barthelme brothers, Stephen and Frederick not Donald, who inherited a sizable amount of money and went down to a river boat and lost it in an afternoon has always fascinated me. This is not the memoir of that stunt but Frederick's tale of a gambler, which I also found interesting. Do you have a favorite tale of a gambler?

Of course, THE LAST GOOD KISS is a classic, but I have not read it. It has the most quoted first line in crime fiction though. "When I finally caught up with Abraham Trahearne, he was drinking beer with an alcoholic bulldog named Fireball Roberts in a ramshackle joint just outside of Sonoma, California, drinking the heart right out of a spring afternoon." I thought "bulldog" was a colorful term for a guy on the next stool, but the next line clears that up "The dog slumped on the stool beside him like a tired little buddy, only raising his head occasionally for a taste of beer from a dirty ashtray set on the bar." Talk about a colorful image.

1984-we read this in my book group, I think. It's an awfully glum book and too much of it came true. It was the play my high school did my senior year and I played what is a man in the book.  It was a Christian high school and the lead actress, Rosemary Camilleri was not allowed to kiss boys so they had to cut that from a scene. See, they should have cast me in the part. I would have been able to fulfill my role's requirements.

EARLY ORGANIZED CRIME IN DETROIT, James Buccellato. Jimmy was a Ph.d student of Phil's and this is a real interest of his. This was not his dissertation though.

THE PIANO LESSON, another book we read in my book group and I saw this play of August Wilson's as well as FENCES, and one or two others. There is a good documentary on August Wilson on Prime right now. Wilson wrote a play about black folks for every decade of the 20th century. THE PIANO LESSON won the Pulitzer Prize for drama.

WONDER VALLEY, Ivy Pochoda -Phil enjoyed this and although I just bought her new book I have not gotten to this or VISITATION STREET, which also sits on the shelf.

DEAR LOS ANGELES, ed by David Kipen-can't remember who gave this to me but I haven't even opened it. Some day.

TRANSCRIPTION, Kate Atkinson, I have read all of Atkinson's books except this one. It's about spies and that is just not my favorite genre. Maybe some day.

Read any of them?

I didn't read the book you have, but I did read Pochoda's VISITATION STREET because it is a real street I know, in Red Hook, Brooklyn. When we used to be able to go to Fairway Market, we drove down Van Brunt Street, and Visitation is one of the side streets that runs off it. She did take liberties with the actual street, though, as the real street only runs one block and doesn't actually go down to the water. You should check out the book, Patti. It's short and dark enough for you. ;)

That's interesting. Just checked on Google Maps and it is listed as Visitation Place, rather than Street. But it is the same place as in the book.

You do have some great books there, Patti. And, yes, 1984 is glum, but it's more important than ever that we read and (re)learn its lessons, in my opinion...

Only read 1984 and that just recently. It was my Books I Shoulda Read a Long time Ago Pile, although it seems more apropos today than when I should have first read it.

I read THE LAST GOOD KISS and 1984. Diane has read a number of Kate Atkinson books for her Book Club over the years, but I don't know if she's read that one. I think Atkinson may have written a sequel to that "crime" book.

1984 is the only one so far. You realize, of course, that Blair/Orwell was writing it in 1948, which is to say he was satirizing things as they were then. Plus ca change. I've preferred ANIMAL FARM as it makes its horrifying points with more grim wit.

Perhaps the Crumley is the most quoted first line since its publication, but there are so many lines quoted from Hammett and Changler...perhaps mostly not first lines.

Yes, this is probably the only quoted line from Crumley but it is memorable. Atkinson has four Jackson Brodie books, two from circa WW 2, a few "literary" books and this. Maybe some others I have forgotten. Wonderful writer. I haven't read ANIMAL FARM since high school. Should revisit.

Atkinson also has a short story collection that I missed. I liked the WWII books. I know some didn't. Haven't read the spy story.

The title is NOT THE END OF THE WORLD, and from the description, the stories don't sound much like her novels. My library has 4 copies available as ebooks, so after I finish the King collection I will check it out.

I read 1984 in college and "The Last Good Kiss" many years ago. Atkinson is one of my absolute favorites and I'd recommend "Transcription" to anyone who's liked her other novels, although personally I preferred the Jackson Brodie series and the WW2 novels. Haven't read the story collection.

I have read 1984 but want to read it again. I have also read The Last Good Kiss but don't remember anything about it. I did read Transcription and I do like spy stories but this one did not read much like a spy story. I liked it anyway.

Well, I do need to read it. There is something about spy novels I find hard to penetrate. Not sure if it is the language of spies or the way they operate but I always get lost. Love the Jackson Brodie series although the last was my least favorite. (Big Sky?) LIFE AFTER LIFE was just brilliant.

Atkinson's sf novel, iirc, at least in the broader sense of speculative fiction or fantasy...have only heard/read good things, and mean to get to it. But I mean to get to so many things.

And we are running out of time, I fear.

I read 1984 either on college or shortly after.
I was introduced to Crumley when BORDERSNAKES came out in 1996 and greatly enjoyed all the PI/crime novels. I believe I bailed on ONE TO COUNT CADENCE.
Gambling novels have always been horribly depressing and sad for me. Same for films. I tried watching MISSISSIPPI GRIND and bailed on that as well.