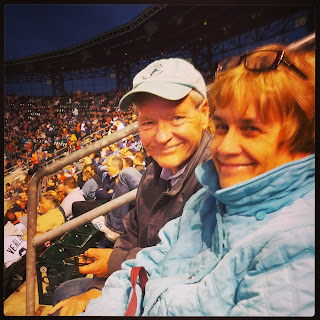 Philip Reading Abbott was born on October 18, 1944 in New Hope, PA. His father, William Harvey Abbott was in the Merchant Marine  and overseas. Bill Abbott would return and become a shop owner, taking over a business, which had been previously run by his father-in-law, Joseph Reading.  Phil's mother, Beryl, helped run the business.  In 1949, a second son, Billy, was born.
Phil earned a bachelor's degree from American University in D.C. in 1966 and Master's and Ph.D degrees at Rutgers University in 1971. He began teaching at Wayne in 1970 at the age of 25. During his years at WSU, Phil published 14 books, more than 40 articles and countless book reviews.  I will cede a recitation of his academic career to his colleagues.
Phil and I met in the summer of 1965. I was seventeen, he was twenty. We married in 1967 and moved to New Brunswick. In the years since, there has never been a day that Phil didn't make brighter. He was my biggest supporter, my biggest champion.  When I finally found I enjoyed writing, he read early (and later) drafts of every story I wrote and always claimed they were perfect and didn't need a word changed. We always has so much to say to each other, so much to enjoy together. He was the one I most wanted to tell something to, and I know he felt the same way.
His childhood was a hard one and the lesson he took from it was to be the best husband and father he could. I'm sure his colleagues believe he devoted his entire life to scholarship, and indeed he was a very productive scholar, and a devoted teacher. He understood Wayne students were mostly first- generation college kids. Phil was the first in his family to finish high school. His parents did not imbue him with confidence and ambition, and he felt many of his students were also very much on their own too. Every class he taught got his full attention. Every exam he graded did too. He felt it was his duty to talk in class about books, movies, and other cultural events that his students might not hear about otherwise.  He didn't use the classroom to proselytize.  Hopefully educated students would make good decisions about politics through the historical lessons he spoke and wrote about.
But Phil's greatest devotion was always to his family. He was available to us whenever we needed him. And it was all the time. President of the PTO at Grosse Pointe North High school, managing and then coaching baseball teams, taking Megan to art classes at CCS on Saturdays, being the room parent that went to Toronto twice with fifth grade classes on buses. He was very glad his kids were never embarrassed about having him around at school and at other functions. He was so proud of his two kids, both of whom strived to succeed in school, in their professions, as moral people, in life. And having a grandson, we were able to spend a lot of time with for his first ten years was the ultimate pleasure.  And both of his children's achievements were a great source of pride.
I am sure the time ahead of me will be as difficult as these last years have been. But I so many good memories to sustain me. How lucky I was to have such a long time with such a good and generous man. I want to thank the many people who have helped us shoulder the load of these last years. I am sure it would have been immeasurably worse without the help of family and friends.  As I was lucky in a husband, and lucky with my family, I am lucky with my friends.
Posted by pattinase (abbott) at 7:28 AM

What a wonderful tribute to Phil! We were all lucky to have known him.

Thanks, Patti. Beautifully done. We were lucky enough to meet Phil several times and spend more than a few minutes with him - in New York, at Bouchercons, in Niagara-on-the-Lake, at dinners and the theater. As I said yesterday, he was always a lovely, gracious, nice man who - unlike most of us - didn't have a bad word to say about anyone. It's a very sad loss.

Thanks, guys. Looking forward to spending more time with you soon.

How wonderful. Beautifully done, Patti, and so obviously heartfelt. God bless you.

The world is always diminished when a good man dies, but the gifts he gave the world will continue to shine. You, your children, and your friends were the lucky recipients of Phil's gifts. Use them often and proudly.

I never met Phil in person, but through your blog and the comments of those who knew him. Now I am one of those he touched and I am the better for it.

Hang in there, Patti. Phil will always be there to support you.

A beautiful and moving tribute.

Thanks to all my friends.

Thanks for sharing this with us, Patti. You were very lucky to have all those years with Phil. I know you will miss him.

This is a lovely tribute, Patti. Thinking of you all, and wishing you peace and healing as you move on from here.

That is a beautiful tribute. I am very sorry for your loss.

Seeing this photo again just now it occurred to me you and Phil have identical smiles!