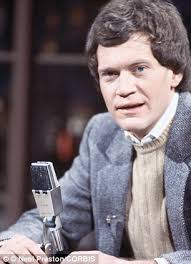 This was the only late night comedy show we ever watched. We were too young for Johnny (or at least his sense of humor) and too old for what came later. But this one, on way past our bedtime and our kids' bedtime, we taped and watched the next day. What brings it to mind is that Megan recommended the bio out on Letterman. Plus a friend commented, she could never tolerate Letterman because he would even make fun of people's names. And yes, he did. But somehow it was a program that brought our teenage kids and us together in the mid to late eighties and early nineties. He was our age but had their sensibility. I can still remember watching our son, Josh, laugh from his spot on the floor as Letterman performed his stunts. Some people really enjoy laughing and my son is one.It got to be old hat by the next decade. But for a little while...

What late night funnyman do/did you like?
Posted by pattinase (abbott) at 7:00 AM

I liked Steve Allen when he was on late-night TV. Also liked Carson and Letterman a lot. Never watched any others.

I wonder if the next generation is more about standup than ours was. My mother liked Jack Paar but I don't remember his show at all.

Never cared for Letterman. My mother in law loved Jack Paar. I couldn't stand him. The only late night guy I ever watched at all regularly was Carson. After all, it was through Johnny and Ed McMahon that I was introduced to one of my all-time favorite movies: IT'S A GIFT.

Both Jackie and I remember the two of them on their afternoon comedy game show, WHO DO YOU TRUST?, which ran from 1957 to 1963.

I always liked Letterman very much.

I was too young for Steve Allen or the original Jack Paar. Allen's later show on primetime was a favorite, though, and Paar's late night reboot did not appeal to me. I liked Leno and could tolerate Letterman in small doses -- his humor tended to be too cruel. Never got very attached to Conan. Other late night hosts of the past (Joey Bishop, Jerry Lewis, Arsenio Hall, etc.) left me cold. Kimmel, Fallon, and Corden are ok, but for me late night was defined by Jon Stewart and his crew. Jon Oliver is a must-see. Stephen Colbert hits the mark more often than not. Larry Wilmore had some pretty good stuff. Trevor Noah keeps getting better. Samantha Bee is fearless. I also enjoy Seth Meyers a lot. As you can tell, my tastes have turned to political humor that puts the real world into perspective.

I wonder if that only ran in NY, Jeff. I don't remember it at all. I think the late night hosts of today have an easy target for jokes with '45. Remove him from the equation and where would the humor be. Yes, political humor is where it's at. Letterman was mean. Much like Seinfeld and Larry David. I think the period of cynicism toward everyone is over.

Currently I like John Oliver and Samantha Bee a lot.

Who Do You Trust?.

They are both great. Although take away Trump and what would they do?

None. I always had work early, and couldn't stay up that last and still get up at 5:30. I didn't have the equipment to tape and watch later, so I didn't watch at all. If I'd had a choice, it would have been Carson.

Always liked Letterman. Carson had on too many bad Las Vegas comedians like Norm Crosby and Joey Bishop and over the hill singers. He wouldn't have any rock and roll or r&b on.

The new Letterman biography is supposed to be pretty good.

A good host or comic will transition as life and culture change. Trump will not be around forever and once he goes away the good comics should survive. That will also depend on who they have working with them of course.

Carson was always my favorite. I watched Letterman occasionally but often felt like he was just wasting time between bits.

I used to watch Dick Cavett and Tom Snyder. Now, I tend to turn in early.

Forgot all about Tom Snyder. We never stayed up late enough to watch Late Night anything. If we wanted to see it, we taped it. (once you could do that).

Al Tucher said...
This comment has been removed by a blog administrator.
3:23 PM

"Although take away Trump and what would they do?"
Bee would be groaning, Oliver sputtering over the Clinton Administration foibles, and Ryan and McConnell's Congress.

Now? Ever? Letterman did allow himself to be scolded by my friend Keiko, since he couldn't pronounce her name and decided anyone with a name ending in O was probably male...so, in a 1983 audience participation segment, he peered out past the lights and called out "Mr. Hassler? Mr. Hassler?" "That's Mss Hassler," she replied from the microphone she'd just been shown to, and she didn't let up. It's good to see the degree to which Merrill Markoe is now getting credit for how much she put into their early network television series.

Recently, my favorites have been Craig Ferguson, not least for his openness to writers (certainly not least Lawrence Block) and his relatively lack of respect for the tropes of the monolog/desk show, and Colbert--I think Colbert's show is shaking down better (but he still doesn't seem to enjoy having any by-play with his bandleader much...not that the latter is very good at it as yet) than it was at its start...though the REPORT was better. But Larry Wilmoree's show was getting into a nice groove by the time it was yanked.Best interviewer was probably Bob Costas. Best innovator, Ernie Kovacs, though Letterman also owed a Lot, even more than everyone else, to Steve Allen, particularly to the Steve Allen Westinghouse Show of the early '60s, the syndicated experiment that was looser and more strange than his network series.

What I've seen of Della Reese's turn of the '70s show, and the repeats of some of Cavett's shows from ABC in the same era, suggest they were among the best for fostering an actual multi-guest discussion. Corden is a pale shadow in comparison, not even as good at it as Jonathan Ross (who has been at it a lot longer, I suppose to be fair, but Corden is wildly overpraised). O'Brien tends to overdo his own shtick, but is perhaps the most comfortable with his guests these days, and Andy Richter has always been the funniest and most insightful "sidekick" since he's been at that role--he's always been a better natural performer than Conan O'B, perhaps since he started as a performer, versus O'Brien, a writer who wanted also to perform.

Charlie Rose and Tavis Smiley, rather like Paar, can't seem to get out of the way of their guests entirely too often. Calmer than they were, but still a little too jumpy.

I think you have the beginnings of a book on late night TV. I have seen very few of these people. Only the ones that are not exclusively late night like Samantha Bee, Charlie Rose, John Oliver.