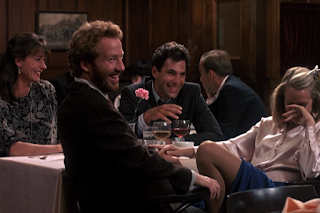 In the famous film, Rashomon, as we all know, Kurosawa shows the same incident from various viewpoints. When THIRTY-SOMETHING did this in 1987 in its fourth episode, it had never been done to such effect on TV. Two couples (Hope and Michael and Nancy and Elliot) go out to dinner at an over-priced restaurant. A quarrel breaks out between the always bickering, Nancy and Elliott. Over the course of the show we see the quarrel from all four of their viewpoints. It involves Nancy doing a drum majorette routine which is sexy, awkward, or ordinary depending on whose eyes saw it. One of the best episodes of a show that is either a favorite or a joke to most people. I stand with those who pick favorite. Yes, yes, they whined incessantly but they were not the wealthy, privileged Ewings or others who came later. And they were certainly not the families seen on BIG LITTLE LIES today.Educated and from the upper middle-class but not rich. And whose problems don't seem trivial to others.
Posted by pattinase (abbott) at 7:00 AM

Jackie liked it a lot more than I did. I always found Hope a whiner, as in the episode where they had to deal with a death (can't remember if it was a friend or a parent) and she whined the whole hour about how darned unfair it was, they were too young, they shouldn't have to deal with "real" things, etc.

Talk about First World Problems. Granted, as time went on they were forced to grow up, but I never got past that. That's why I so enjoyed Miles Drentell tormenting Michael and Elliott.

So, not a favorite, then.

Diane liked THIRTY SOMETHING more than I did. I found the sub-plot about the possible business "acquisition" laughable.

Maybe the episode inspired Quentin Tarantino, ironic if it did!.

Yeah, it was probably a chick show. But there are so few shows about married life on TV and so many about cops, hospitals, crooks. I have to like the ones there are. And this was well put together and acted.

Hated this show. Avoided it if I could. Especially Patricia Wettig who thankfully disappeared after the show ended.

Steve, she's been in a bunch of other things, like BROTHERS AND SISTERS (another show my wife watched but I didn't). She's married to Ken Olin.

Not one I watched more than once or twice. I guess this is about the time I pretty much stopped watching TV except some sports, some Public Broadcasting shows, documentaries, TCM and the like.

At the beginning of the series I liked the show a lot. But by the end I hated all the characters. I guess they just were too unlikable and the whining was too much.