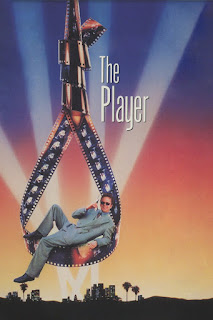 A.O. Scott (NYT movie reviewer) was in Detroit over the weekend and the Detroit Film Theater showed two of his favorite films with him introducing them. I loved THE PLAYER when I saw it on its release. It's the story of a Hollywood producer who begins getting threatening postcards from someone who pitched an idea to him and was ignored. But more than that, it's about the Hollywood system of making movies circa 1990.

It didn't hold up very well for me. The dozens of cameos (and I had to remind myself who some of them were) distracted me from ever getting engaged in the movie either as a black comedy or a noir film. Whoopie Goldberg and Lyle Lovett as cops were ridiculous. Tim Robbins didn't seem nearly as engaging as he did 25 years ago. Sure, it has Altmans's signature overlapping dialog and was probably fairly adept at skewering Hollywood, but it had no heart and was not particularly exciting. Phil liked it more than I did. I think 25 years ago, he liked it less.
Posted by pattinase (abbott) at 7:00 AM

I never loved it. Robbins' smugness almost always annoys me, and this was an early example. It was a cold movie.

I admit; I've not seen this one. And it's interesting how some movies hold up over time...and some don't.

I loved this movie at the time. Bought it on VHS and watched it more. For me, it was one of those meta movies about making movies. Haven't watched it in years, however. Might dig my VHS out and give it another viewing. Enjoyed the ending quite a bit.

I am wondering if the times ruined it for me. I loved it then too and I thought, oh, boy, seeing it on a big screen will be great. But the parade of stars in the cameos was distracting. Although perhaps that was the point. I think he actually says that at some point. That Hollywood movies are an excuse to parade celebrities rather than tell a story.

The smug entitlement is what Robbins's character is about...everything he does is about that. And few of the other characters, including those who loudly claim otherwise (such as Cynthia Stevenson's character, or Greta Scacchi's in her more blithely bohemian way, are any less self-involved, being the only way they can exist in the world in which they live.

But in 1991 we could take a step back from it, I think. Now it surrounds us and so was painful to watch.

I think you lived in a rather different set of circumstances in 1991 than I did, on the edge of that other one-industry city, DC....as bad as having the single industry of a collapsing automotive industry must've been, the bad cess of being around that much neocon and neolib muscle-flexing, and lobbying and beltway banditry, was rather painful...and corresponded pretty well to the portrait of Entertainment Industry Town in this film...

I loved it and thought it was very authentic, especially Tim Robbins, the girl friend he leaves and and the frantic to succeed characters. Having been around some Hollywood types, it was authentic to me.

Patti – I saw it when it came out, but it made no impression on me. I can’t remember anything about it. I never got Altman. He was a critics’ favorite for years, but his films did nothing for me – not even MASH or NASHVILLE. However, Altman directed the first couple of episodes the TV show COMBAT and may have been the one who set the b&w, documentary style of that show. (All of COMBAT reran on cable a few years ago, and I thought they were great.)

Scott-watching this on an old VHS tape? VHS looks like crap. I have the recent Criterion Blu Ray and still enjoyed it when I recently watched it. Altman was always hit or miss with me. Nashville & MASH don't hold up for me but I still love The Player, The Long Goodbye, 3 Women and a few others of his. McCabe & Mrs Miller is in my top 10 movies. And I actually like Popeye.

I feel the same ambivalence. And also love Popeye.