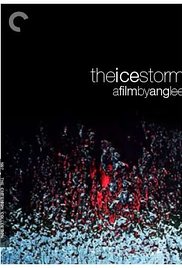 I doubt there are many movies more cynical than Ang Lee's film of Rick Moody's book, THE ICE STORM. I rewatched this last week, having forgotten just how misanthropic it was. Even the kids come off pretty badly (Ricci, Macquire, etc.),  Suburbia has never looked more desolate or dispiriting.
Can you think of a more cynical film?

(For those who may have forgotten or never seen it):

In the 1970s, an outwardly wholesome family begins cracking at the seams over the course of a tumultuous Thanksgiving break. Frustrated with his job, the father, Ben (Kevin Kline), seeks fulfillment by cheating on his wife, Elena (Joan Allen), with neighborhood seductress Janey (Sigourney Weaver). Their teenage daughter, Wendy (Christina Ricci), dabbles in sexual affairs too -- with Janey's son Mikey (Elijah Wood). The family's strained relations continue to tauten until an ice storm strikes.
Posted by pattinase (abbott) at 7:00 AM

Steve Oerkfitz said...
This comment has been removed by a blog administrator.
7:21 AM

Oh, I haven't seen this one, Patti. It certainly doesn't sound like something you want to watch to cheer yourself up...

I grew up in Connecticut in the 1970s and it was exactly like this. What's cynical about this? It's so very true. It exposes the parts of all America (not just "suburbia") that no one wants to think about -- people suffering in unhappy families, kids at the mercy of ineffectual parents, an entire country wallowing in the aftermath of deceitful leaders and public figures, and everyone losing faith in all you believe in and hiding behind all of that grief and sorrow with a nasty ironic humor. In fact, it's no different than what I see today, every day of my life.

I guess it depends on your definition of cynical. I think it can be true but still cynical if that's the only world it shows. Look at the first phone call between McQuire and Kline. It's like they hardly know each other. Very sad. Yes, so interesting the parallels to the politics today.

It's been years since I read and then saw the movie version of The Ice Storm, but--call me cynic, if you will--I enjoyed both.

I am a Moody fan too but it's perhaps too one-note.