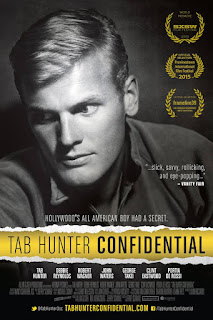 This film came out last year, but I caught it on netflix. Tab may have been my favorite movie star as a preteen. He was perfect for that age-so wholesome,  handsome, gentlemanly. And I liked him even more after watching this. He was crazily honest about himself, his talents, his life. And I felt so sorry that he had to be closeted for most of his career. I think you will be surprised at how good he was in a lot of roles. People equate him with beach movies, yet he made only one. And he was a pretty decent singer too.

His later career, after he left Warner, was sad. There was no publicity department to stop the rags from outing him then. But he did meet up with the love of his life who is still with him today. So often you dislike a celebrity after a doc like this but I liked him more. Eddie Muller is responsible for the co-written book that initiated this film. And Tab is still movie star good-looking.

Who were your early heartthrobs?
Posted by pattinase (abbott) at 8:55 AM

It's funny, because that was one of the documentaries we noticed when we were checking through the Netflix offerings. How many of these "heartthrob" actors turned out to be gay - Rock Hudson of course, Tab Hunter, Richard Chamberlain, Sal Mineo, Raymond Burr (OK, not much of a heartthrob), Tom Tryon, even Van Johnson.

Did not know about Raymond Burr. Troy Donahue, George Maharis, and probably more. Terrible to have to live your life hiding a basic characteristic.

The others are dead.

Early heartthrob? Natalie Wood. I fell hard when I saw her in Rebel Without A Cause.

Or Splendor In the Grass, or both.

I know I've mentioned this before, but I strongly recommend reading Ned Wynn's WE WILL ALWAYS LIVE IN BEVERLY HILLS. He was Keenan Wynn's son and Van Johnson was a family friend. However, when Johnson was threatened with being outed, the studio stepped in, the Wynns divorced, and Johnson married the former Mrs. Wynn. The marriage was (unsurprisingly) miserable and eventually broke up when Johnson left his wife for another man. According to the book, Johnson never again saw the daughter he had with the ex-Mrs. Wynn, even though she was his only child.

My heart goes out to all the lives ruined by the celluloid closet.

Just watched the movie on Netflix. Very interesting indeed. I'd forgotten all the things he did over the years.

Natalie was 16 at the time of filming Rebel and her beauty really was quite astonishing, her scenes with Jimmy Dean still have a magic and charm about them that few other on screen lovers have achieved before or since.

Jeffrey, after watching which of Rock Hudsons movies would you find it most difficult to believe he was gay ?...thats right...you guessed it...first time..."Pretty Maids All in a Row" (1971), still not a bad movie by the way.

Patti, Tabs equivalent movie would surely be "Lust in the Dust" (1985), his "LUST" for Lainie Kazan really did seem completely genuine and real in that movie.

While watching this I realized I had seen Polyester but not Lust in the Dust. Will have to look for it.

While watching this I realized I had seen Polyester but not Lust in the Dust. Will have to look for it.

Earlier posting under my name is not mine.

No he is our resident troll. What a shame!