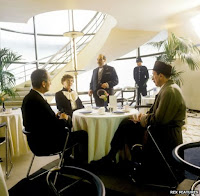 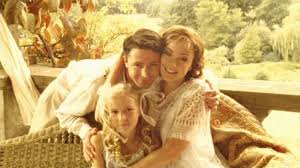 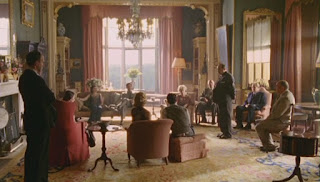 Okay, this was one of the better Christie's I've seen. It was smoothly done, well-acted, great period detail. I couldn't begin to guess the murderer until it was nearly over. And yet, for me, it suffered from the same problems many of the Christie's suffer from. There are simply too many characters to sort through and few are developed well. Every character gets to do a walk and talk with Poirot. And in the end, we spend fifteen minutes hearing him put it together.

I am not sure that the world Christie created ever existed. As a teenager reading her, it certainly was not a world I knew at all: people dressing for dinner, filling a country house with family and friends, elegant cars pulling up a long driveway, servants listening at doors,a  murderous lower middle-class woman taking her revenge. (That seemed to happen quite often).

So although I am not so much an admirer of the whodunit plot she insisted on, I am an admirer of what Christie achieved. How she either created or captured a world I never knew. And these BBC productions, with their excellent casts, sets, and direction capture it a second time. And David Suchet will always be Poirot for a generation or two. He gets is so right.

Here is an article in the Irish Times with many crime fiction writers talking about Agatha if you haven't seen it.

Okay, the next night we watched FIVE LITTLE PIGS, which I thought quite brilliant.  There were many fewer characters and they were well developed indeed. Although we have the denouement at the end there is a final twist that is clever and makes perfect sense. I would rate this as the best Christie I have seen so far.

Watched the ABC MURDERS, which was also awfully good. I have done Christie an injustice by remembering her novels as too much one thing.  Close to as good as FIVE LITTLE PIGS.

Also we knew we had first read the name Megan in an Agatha Christie novel.  This was it.
Posted by pattinase (abbott) at 7:00 AM

Very glad you found some Christies to enjoy, Patti. Some of the adaptations are done very well, I think. I mostly prefer the ones that stay very faithful to the book, but that's just my view.

We've noticed over and over how many TV crime shows use the "ABC" storyline (I won't explain it for those who haven't read the book; they should read it as soon as possible). As soon as it pops up one of us will say, "Uh, ABC" and we usually know where it is going. And that was only one of Christie's clever subterfuges.

I'm with Margot. The BBC took non-Poirot and non-Miss Marple novels and transformed them into films featuring Christie's most famous detectives. I'm sure it was a money thing.

What's wrong with a large cast of characters? It's truer to real life than the formulaic "closed set of suspects." In my experience I've encountered far too many of the "lower middle-class woman taking her revenge" type in real life than you would ever imagine. Murderous or otherwise.

The real brilliance of FIVE LITTLE PIGS is in the reading of the novel. Film offers you the luxury of seeing the events of the past, but in the book the past can only be related through letters, diaries and people's memories. Two or three years ago I re-read it for the first time since I was a teen-ager and marvelled at the way she treats memory in that book, the way seemingly picayune details have a way of working their way into one's memory in the oddest way and staying there for a long time.

I agree with John, I have no problem with a large cast, it's a large world. But I like about all of Christie. I came to them, as mentioned in your recent post about reading, in my mid-late twenties, as opposed to so many here who apparently read them all (!) in their teens, when I was reading science fiction and fantasy, plus whatever was assigned in high school classes, and that was certainly not mystery fiction. So to discover stories and novels with multiple suspects and a puzzle was a treat.

ABC is one of my favorite Christie books, though after a reading and the culprit revealed, it's not as much fun. I think it doesn't matter that the world created in the books and depicted so beautifully in the British productions isn't "realistic". Why should it be, or have to be? I think if a reader wants things to be absolutely realistic, then the newspaper, not fiction, is the place to go.

ABC is a great one. Lord Edgeware Dies (aka Thirteen at Dinner) is another classic book that made a pretty good adaptation. I thought Fassbender was sort of wrong for Christie, though. He's too intense.

I prefer the lighter and shorter Poirots but it was a great series. The only one I haven't watched is Murder in Mesopotamia because I started reading it once and pan to come back to it. It had an engaging first-person narrator. Christie was good at that; Murder at the Vicarage is my favorite example. It's a Marple but it's narrated by the vicar.

I’ve enjoyed the Poirot series with David Suchet for years. Great productions and one of the best theme’s ever. I think the music is called “The Belgian Detective,” by Christopher Gunning.

I think I am working my way into it. But I still prefer the ones-not in a country house-not about the super-rich-not too many suspects. Closer to today's fiction, I guess. I guess the rich will always irk me.

Christie was very much a product of the late Victorian era of her upbringing. She was raised by her grandmother and great-aunt (the deaths of both of them, very close together, is often given as a one of the reasons Christie had a breakdown when her husband left her not long after) and had a rather lonely, isolated childhood. She absorbed that high Victorian concept of life from women who had lived in that world. Even her mid-century work is Victorian manque (which I love).

I can't name a favorite Christie--the majority of them each has something special. I don't mind the large cast of characters or the convoluted plots. My favorite stand-alone Christie is ENDLESS NIGHT which is very close to noir and has a great twist close to the end.

I am glad you noted some of the Christie adaptations that you enjoyed. I have been wanting to watch some adaptations. I had heard the FIVE LITTLE PIGS was especially good. I do want to read the books first though and I haven't read any of these. So will have to wait a while to try them out.

Anonymous said...
This comment has been removed by a blog administrator.
10:07 AM

This is just a quick comment to note that the Suchet Poirot series is not made by the BBC but for the commercial broadcaster ITV.