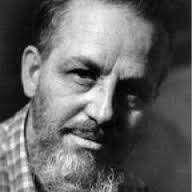 From the Wolfe Pack, the Rex Stout Society.

Rex Todhunter Stout was born in Noblesville, Indiana, December 1, 1886. After a brief time on campus at the University of Kansas, Stout quit school to enlist in the Navy where he spent two years as warrant officer on board President Theodore Roosevelt's yacht.

After the Navy, he began to write for pulp fiction magazines and also tried his hand at a variety of jobs.

He published three novels before he turned to the mystery genre. The books received favorable reviews but were not best sellers. Following the 1929 stock market crash he lost a great deal of the money he had saved. He returned to the United States and continued to write serious novels for a few more years. In 1932 he moved from New York City to High Meadow, the house he built on the Connecticut-New York state line. In 1934 Rex Stout published his first Nero Wolfe novel, Fer-de-Lance.

More than seventy other Nero Wolfe books and stories followed. During World War II, Rex Stout waged a personal campaign against Nazism serving as chairman of the War Writers Board, wrote and broadcast the CBS radio program "Our Secret Weapon," and was a member of several national committees. After the war, he resumed writing Nero Wolfe novels. In 1959 he won the Mystery Writers of America's Grand Master Award. Rex Stout died October 27, 1975 at the age of 88. A month before his death, he published his final Nero Wolfe book, A Family Affair.

Damned if I didn't forget Stout day...argh. And I was thinking about one of the ELLERY QUEEN'S ANTHOLOGY issues with a Wolfe novella just the other day, but everything, as usual, got in the way of reading it.

So, instead, here's a duo with the kind of long, unwieldy title you love, Patti...I don't choose 'em for them, honest.

Though I continue to recommend this memoir, by Martha Foley, a great friend and writing colleague of Stout's, as informative about the early development of Wolfe and co.:

THE STORY OF STORY MAGAZINE by Martha Foley (assembled and notes added in part by Jay Neugeboren), W.W. Norton 1980

Somehow I missed Stout day, too, Patti - which is a shame, because I devoured his books when I was growing up. Nice choice for a theme, though!

I should have announced it again. I will announce them more often from now on.

Hi Patti, There appears to be an error in the link to Todd's article.
Frank

A little tidbit: Archie sometimes on Wolfe's girth by pointing out that he weighs one seventh of a ton. That sounds impressive, but do the arithmetic. It's about 285 pounds. Apparently the obesity epidemic in 21st century America is real, because that's pretty routine now.

Was just talking with a couple of huge Rex Stout fans.

Here's my FFB for this week. Not Rex Stout, rather a thriller by a man who led a rather extraordinairy life. The author's debut, it's a pretty decent summer read:

The Quebec Plot by Leo Heaps

Sorry for missing it.

Patti, thanks for including a past essay of mine for this week. However, I read one Stout book especially for today. I just finished adding all the illustrations to the post and it's up now.

I love Nero Wolfe and Archie - a great theme, Patti. I've read all the books and yet I keep going back and rereading and rereading. Far as I'm concerned, Rex Stout was a genius at what he did. (I believe he was also a mathematics brain ala Professor Moriarity. Ha!)

I would rate him in my top ten. Beautiful writing in that Black Mountain. I just wanted the old hi-jinx

Thanks for including two of my posts (Black Orchids and Some Buried Caesar) and thanks for doing a special FFB post for Rex Stout.

Thanks for including my older entry in this, very kind I do love Stout and the Wolfe books!

I'm a huge Nero Wolfe fan! I didn't realize it was Rex Stout Day...I guess I celebrated at the beach. :)