For Your Summer Reading... 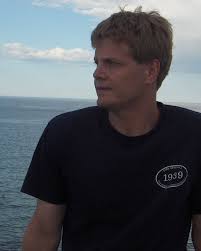 Jim Hawkins, and I think I remember a Jim Hawkins in Treasure Island, is hired as a summer relief trafffic cop at a New England resort in White Shark. He is not quite an albino (his words) but white-haired, big and tough from recent military training. The idea that he will be satisfied with giving out traffic tickets (in a speed trap to boot) and keeping troublesome kids under control quickly goes afoul when the island turns out to have more trouble brewing than the beach in Jaws.

A Viking funeral, a missing worker,  shark attacks, crooked developers, corrupt local officials, and white slavery are overrunning  this Edenic spot along with the hideous houses dotting the shoreline.  But Jim has misunderstood his function on Nausset and almost joins the pyre of mounting bodies. He's not the type of guy to overlook trouble when he finds it, a trait that got him drummed out of the military.

I am imagining another Jim Hawkins novel is underway. This is a well-written, fast-moving story with a protagonist you will like. He hearkens back to heroes of old, but the crimes covered here are very much of today. There may be a few too many balloons in the air because Gresham lets few crimes go unsolved but Gresham is cleverly using the genre to critique what he finds wanting in society. A fine strategy to me because he's a good enough writer to do it.
Posted by pattinase (abbott) at 8:00 AM

It sounds a little like the J. W. Jackson books written by the late Philip R. Craig, that were set on Martha's Vineyard, at least the stuff about the summer people.

My library doesn't have it - they are very bad about Five Star Books - so might have to buy the Kindle edition for $3.99. The cheapest copy available on ABE is $18 with shipping.

Just when I thought it was safe to go back into the water... I'll have to track down a copy of WHITE SHARK. Sounds like perfect Summer reading!

Hardcover, paperback? I'll put it on my Bookswap wish list.

The only listing for the title is by Peter Benchley. Hmmm.

I like the idea of heroes of old. I do remember a Benchley book of this title too

This does sound good, Patti. And I think it's clever that the name Jim Hawkins (which is from Treasure Island) was chosen for this one.

@Jeffrey Meyerson, your library might purchase the book if you ask them to -- I'm a librarian, and I know most libraries have a "request purchase" button somewhere in their websites. If you email me with your location, I can help you with this -- but you'll probably have to put in the request, because most libraries require you to have a library card to do it. I'm jessyrandall@yahoo.com. (I'm also Ross's wife, so you can see I have a vested interest in getting the book into more libraries!)