THE GOOD WIFE: Jumping the shark

This has long been the one network show that we liked. But over the last  two years it feels like they are throwing dozens of balls into the air in the hopes you won't notice that none of them land. In other words, they are diverting your eyes from the fact they ran out of ideas about the time they killed off Will.

So no story line ever gets real development. Does anyone even know why Alicia was running for governor or why she lost? Does anyone care which law firm she works for or why? Why her husband thought he could run for president with his baggae? What in the world Eli does with his days? Does the actor playing Jason get by on that smile in other parts. It's just not charming enough I'm afraid.

I know this is the last season for THE GOOD WIFE, but how much better these characters would have been served ending it two years ago. Before Alicia became a boring alcoholic. Using a whole season to show  her grief seems excessive. And I am so tired of ditzy mothers and this show has two. 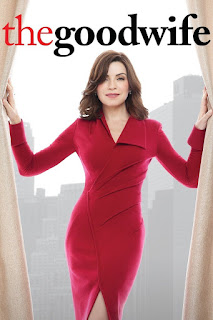 What other shows have gone off the tracks for you? What shows went on too long?
Posted by pattinase (abbott) at 7:00 AM

I'll be honest, Patti. I haven't watched this one. But I know what you mean about jumping the shark. I think CSI went on for a little too long...

AMERICAN IDOL is ending after several seasons of mediocre talent. DANCING WITH THE STARS (are these people really "stars"?) is just as bad.

AI has got to have been on for more than 10 years. I remember my Mom watching it. CSI also.

State's Attorney, not Governor, but yes, I only keep watching GOOD WIFE because Jackie loves it. Every scene with Eli is annoying. David Lee is a cartoon. They fired Alicia from her own law firm and then she goes back to work for them? They wasted more than a season with her running for office, she won, and then she resigns? Peter running for President or Vice President after going to prison for corruption?

I for one am glad it is ending at last.

On the other hand, why did USA cancel IN PLAIN SIGHT?

I don't think you watch THE WALKING DEAD, but if you did you'd have seen Jeffrey Dean Morgan (who did the same on GREY'S ANATOMY and other shows), enter as the incredibly evil - but grinning - psychopath Negan in last night's finale, complete with his barbed wire-wrapped baseball bat.

Almost every show we watch has jumped the shark, and some did it from the very first episode. Since I have never found anyone with lower brows than me, that seldom matters to me. Eventually I stop watching -- more from inertia than anything else.

Of the shows I watch that have not jumped the shark, I can only think of four: GOTHAM, BLACKISH, THE WALKING DEAD, and GAME OF THRONES. I'm sure many will disagree with me on these.

I agree that Castle has jumped the shark. I still turn it on occasionally and last about five minutes. Blue Bloods is one show that hasn't reached that point. I can't say about How To Get Away With Murder because most of the time when I am watching it I can't figure out what is going one.

Jackie is still watching SCANDAL, though she believes it has jumped the shark. When your main claim to fame is cartoonish characters who will do literally anything, plus a need to top yourself with more over-the-top action week after week, you are not in it for the long run. I believe that's why their ratings are way down this year.

She quit the awful HOW TO GET AWAY WITH MURDER a while ago. There are NO pleasant characters, the premise is appalling, and after watching it you feel like you need a long shower.

For me the more interesting aspect about THE GOOD WIFE is that actors in supporting roles are primarily known for having a career on stage. Theater actors are showing up with increasing frequency on lots of TV shows filmed in New York and Chicago, but they show up on THE GOOD WIFE more than any other TV show.

She was running for Illinois District Attorney. And it grew out of a desire for the return of political ethics to Chicago and Illinois and to get rid of the crooked DA played by Michael Ceveris who was responsible for throwing Cary in jail. Eerie coincidence: the most recent Democratic primary race for Illinois State's Attorney had real life parallels even if all the candidates were women.

Many of the characters portrayed on THE GOOD WIFE are very much like the people I encounter in the hospital I work for. David Lee may be a cartoon to Jeff but I know doctors, like Lee, whose only interest is self-interest and who lately have been bragging about making nurses and residents cry. This is in an teaching pediatric hospital. Nice! Howard is more of a cartoon to me than anyone on that show. What an embarrassing character and a pathetic depiction of a lawyer who needs to retire.

Every single reality show on network TV has lasted far too long. SURVIVOR, THE AMAZING RACE, THE BACHELOR and its equally insipid spin-off, BIG BROTHER, all those WHOZITS GOT TALENT shows, et al. -- get rid of the lot of them, I say.

I think they have always done a good job with giving her complicated, interesting cases. But her personal life has always been a distraction because they refuse to just let her have a real life. Sadly, there are people like Howard in every field. But most are pushed out. We had a guy in the university where we worked who kept his office after a very late retirement and came in every day and fooled on his computer.

Shows that have not jumped the shark: Network 0; basic cable: THE AMERICANS; Premium: SHAMELESS, VEEP

GOOD WIFE does use a lot of Broadway actors (much as L&O always did), as they film in New York. The same is true of MADAM SECRETARY. Most of her assistants have been on Broadway - not just Bebe Neuwirth (of course), but Zeljko Ivanek, Patina Miller (won a Tony in PIPPIN), Sebastian Arcelus, and Erich Bergen.

Is MADAM SECRETARY worth watching?

Jackie loves it. I think it's worth watching.

Jackie loves it. I think it's worth watching.

OK. I think I can watch it on NETFLIX.

And like THE AMERICAMS, the lead couple are "dating" in real life as well.

MADAM SECRETARY in the first season was basically what would happen if, as they did, one dumbed down BORGEN and made the PM into the Secretary of State. Decent cast, really awful scripts. It might've improved, but one episode in the first season centered around the Sec/State's husband, a professor, feeling Too Righteous about grade inflation in a situation where lives were at stake. As in, he needed several quick slaps to the head.

This is bullshit on a level that THE GOOD WIFE at its most unlikely hasn't touched. I thought the the episode before last was a very fine one, and if I remember correctly Peter Florrick had been exonerated of the charges that put him in prison (even if he might be prison-bound again). It's also amusing to see Ann Harada, whom I went to high school with in Hawaii, in a bit role in an episode, as she is an NYC-based actor/singer.

Not bad on broadcast: MERCY STREET...iZOMBIE is pleasant, as a crime drama/horror crossover.

Not bad on cable or better: HAP AND LEONARD. THE VENTURE BROTHERS, YOU'RE THE WORST, FULL FRONTAL WITH SAMANTHA BEE, NOT SAFE WITH NIKKI GLAZER, BROAD CITY (though the portags being more stupid than they should be can grow tiresome, as it usually does in such situations)

Pretty good on premium and similar: LAST WEEK TONIGHT, THE CIRCUS, JESSICA JONES, CATASTROPHE, and a few others. I do look forward to more VEEP.

SHAMELESS's current season seemed short, somehow...and the conclusion was a bit Too Neat, I thought.

Haven't seen MERCY STREET or IZOMBIE.
Hap and Leonard didn't feel authentic to me. Maybe I should have stuck with it.
You're the Worst was good, especially dealing with her issues near the end. Samantha is too much the same every week but I like it. Broad City is very funny when it isn't too vulgar for my advanced years. Loved Catastrophe. JJ -Can't watch people with superhuman powers. It isn't fair. Shameless started out bad, got good in the middle and ended up like it always does. Rooting for them all though-except Frank.

The best thing about iZombie (which is fun) is the lead actress - Rose McIver. You would never guess in a million years she was from New Zealand. Her accent is flawless. It has a little of the feel of VERONICA MARS as it has the same creator, Rob Thomas.

I really like LAST WEEK TONIGHT too. I always liked John Oliver on The Daily Show and he is terrific here.

I also agree that Castle has jumped the shark. Used to enjoy it but two or three seasons ago it lost all interest.

We also gave up on Criminal Minds because of so much torture in the shows. I thought the characters were great and had chemistry, but I can't handle that type of torture. I have watched the new show with Gary Sinise and it is not so bad, but I don't have hopes for that lasting.

VIKINGS isn't what it used to be. The Chinese slave girl with her magic potion is a stretch too far.