In SHOT IN DETROIT, twelve African-American men under forty die. At one point in its long gestation, I composed back stories for each man, not sure if I would use them or not.

I decided not. The story belonged to Violet Hart, the photographer, and these long pieces diluted that--and it made for too many characters, something I personally don't care for.

But I do feel their stories are worth telling. The stories are all basically fictitious but mirror the sort of deaths that take place in any urban area. 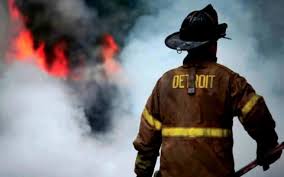 A female reporter stuck a mike in Pete’s face on Christmas morning, after the fire was out. “How many years have you been with the DFD?”
Seventeen, he told her. Most of them spent in a 109-year old firehouse that was a fire hazard itself. No one knew about the condition of the wiring, but who had the money to replace it? Not Detroit. He didn’t tell her that, of course. They’d been read the riot act about dissing the City.
“I hear you’re the one they call on when a fellow fire fighter is buried under debris.”
Pete was 6”4 and weighted 270. He could yank floorboards out if it took that. Hoist fallen walls, loosen joists, carry two people at once.
“Done it once or twice.”
“Like today, right? You pulled someone out today? On Christmas.”
He nodded.
“How do you feel about risking your life to put out a fire set by arsonists? Torched a house that’s been scheduled for demolition for five years.”
Suddenly she sounded angry; her eyes dark holes. Pete was flummoxed for a second, still taking in the face he’d watched for years on the nightly news. A black woman with lighter freckles that he saw now. He guessed the heat had melted her makeup. Was she angry with him or was it just for show? Did she want him to rant about it?
“Breaks your heart. Breaks your heart,” he answered senselessly. Then he caught the jittery look of his crew commander and tried to come up with something better. “And  these guys here today—man—they do whatever they can for the people  in Detroit. Today and every day.  ‘Specially on Christmas.” He stopped short, seeing she’d already pulled the mike away.
The Christmas wreath with bells on her lapel jingled as she walked away. He wondered how she could navigate the icy sidewalk in those high heels.
They didn’t show much of what he said on the news that night. Instead the shot was of the rubble from the vacant house burned to the ground, a comment on the DFD failure or the vicissitudes of this city. But the fire hadn’t spread to the house next door, inhabited by an elderly woman and her grandson. That was their success.
Sephia and he watched the whole thing after they finished off the holiday ham and exchanged gifts. Just the two youngest looking on with saucer eyes.
“That bitch,” Sephie said, switching the TV off. “She didn’t have to show that trashy yard. Made it look like you guys failed."
“Doubt it was her decision,” Pete said, defending the woman he’d spent two minutes with. The face familiar to him from years of watching the TV news—except for those freckles. “Don’t they have bosses to decide that?”
“Damn, I wish I’d taped it,” Sephie said, jumping up. “Maybe they’ll show it again at eleven. I wonder if any of the neighbors saw it”
That hadn’t, of course. Didn’t watch the news. And Channel 8 didn’t air the segment again. There were new fires, robberies, and deaths to report. The Free Press story the next morning was on page 6 and didn’t even mention him. The headline read EARLY MORNING CHRISTMAS FIRE ON THE EASTSIDE. It barely got a column.

It was a vacant house again just a few weeks later. Another on the list for years. Maybe inhabited by a squatter. Sometimes a squatter would torch a house he knew was due for demolition—just out of pique.
Place was a dump. And also an inferno by the time they arrived. Flames and smoke were already blowing out the windows on the second floor. Engine 28 and Squad Car 2 arrived, joined by two more pumpers, a ladder truck, and a battalion chief. An additional crew stood ready. Engine 28 fired a surge of water that knocked back the fire. The crew stormed the house seconds later, a Detroit fire-fighting tactic not shared in many cities where the approach was more cautious. They advanced up the stairs, hose in hand. Pete in front, ready to knock down whatever got in the way. He was high on adrenalin. That’s the way it worked, the reason they went forward. The men doused hot spots as they moved up the steps and into the attic.
It happened quickly. There was a creaking sound, and few pieces of wood from the ceiling dropped to the floor. Less than two seconds later, the entire roof collapsed. Pete Oberon was pinned to the floor. He made it out of there on a stretcher, made it a few weeks more in a hospital bed. But the pain was too enormous, the infections too great. Septicemia killed him as much as the burns.
He made the headline this time.

This is powerful, Patti! And well-written, too. I'm glad you're sharing these, even if the focus (no pun intended) is on Violet.

I agree, Patti, I am glad you are sharing these. Very thought provoking.

To say so much in so few words shows real talent.

Thanks so much! So kind of you.