Naturally a big Seinfeld fan is going to like CURB too. This was my favorite episode. The description is not mine as the jet lag hasn't curbed. 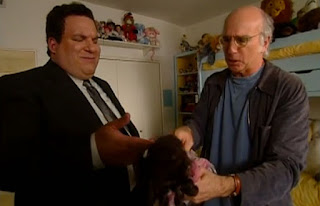 Earlier we said it’s the rare Curb episode that manages to restrain Larry David’s attention span and introduce varying plot elements that assemble together beautifully and seamlessly in the climax. “The Doll” is one such treasure. Everything that precedes the final scene, from an annoyingly righteous theater attendant, to a latch-less bathroom door, and of course, the doll, plays a part in creating the horrific, hilarious but also horrible, how-is-he-going-to-explain-this situation that Larry finds himself in during the final minutes. Nothing is extraneous, making “The Doll” a textbook example of tight sitcom writing, and as only the seventeenth episode of the series, solidfying Curb.

As if it needs more praise, “The Doll” also boasts a top five Susie massacre (and the first time the show employs the Western-showdown score as her takedown theme?) when she catches Larry and Jeff sneaking around the house (they’re separated at the time) and later when she realizes what they were up to. In the opening moments, Larry and Julia Louis-Dreyfuss are pitching a show about a sitcom star tired of being associated with her one famous role. After this episode though, Larry had officially stepped out of Seinfeld’s shadow.

Must admit, Patti, I never saw this one. I've always heard good things about it, though...

Curb Your Enthusiasm is so funny!!!!

I prefer the episode of "The Doll" from "Rod Serlings Night Gallery" (1970), theres no CGI and not even any animatronics but its still unnerving to this day 46 years on.

"Police Squad" (1982), THE most hilarious six episodes in the entire history of television.

I still like "Thunderbirds" (1963-67), (so brilliantly booted in the cobblers by "Team America" by the way), its amazing to realise that any episode of that 50 year old British made TV puppet show is still 100 times better and more imaginative than anything that the British film industry makes for release in cinema's NOW ! ! !. The British used to make great science fiction and horror for cinema and TV but now for some strange reason they only make films and shows about people doing their laundry.