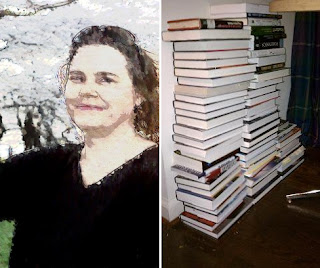 I think this photo is a fairly accurate representation of our bookshelves, which are more like book piles . . . and closets, and underbed storage containers, and plastic bins. It’s not impossible that we have over 1,500 books in our house total, enough to open our own bookstore or library. Can’t help but think of Dr. Seuss: “Fill your house with stacks of books, in all the crannies and all the nooks.” Still, I would love to be able to read each and every one - if not in this lifetime, perhaps the next?

Well, it’s more like my chest-of-drawers Towering Table of Titles, but they include Down Among the Dead by Peter Lovesey, Blood on Snow by Jo Nesbo, Perfidia by James Ellroy, The Figaro Murders by Laura Lebow, and What the Fly Saw by Frankie Bailey. (Being a book blogger means an embarrassment of book riches, thanks to ARCs). Concrete Angel is in the mail! (And really looking forward to it.)

Who is your favorite novelist of all time?

I’ve given this question a lot of thought in the past, but I really can’t nail down just one. It’s not really a cop-out because I have such diverse tastes that anyone I name today might not be the one I’d name next month. I will always be a fan of Charles Dickens and Agatha Christie, though. For pure down-the-rabbit-hole fun, I enjoy reading Jasper Fforde.

What books might we be surprised to find on your shelves?

Nonfiction science books, and lots of them—my school science education was almost non-existent, and I’ve had a lot of catching up to do. Right now, they include Death From the Skies by Phil Plaitt and The Universe by William Kaufman. I also just bought the latest issues of Analog and Clarkesworld to catch up on some sci-fi short fiction. There’s also some Mary Stewart because I have a romantic suspense series I’m working on—a bit of research. Did I mention my tastes are eclectic?

Who is your favorite fictional hero?

I’d have to name my own literary creation, Scott Drayco as a favorite. I plan on sticking with him for several books in this mystery series and even age him over time, so if I didn’t like him, the books wouldn’t be much fun to write. Otherwise, I could name Sherlock Holmes, because “brainy really is the next sexy,” but also because of the character’s outsized influence over almost every aspect of detective fiction. And to keep things gender-balanced, one of my earliest and most favorite female fictional heroines is Portia from the Merchant of Venice. In addition to having one of the largest Shakespeare female roles, she’s resourceful, intuitive and clever.

Since my free time is scarcer than scarce, I tend not to re-read books (except my own, for editing purposes). Life is short, and I want to cram in as much as I can, which means always trying as many new things as possible. This doesn’t mean, however, there aren’t any books/plays I would mind re-reading, including Shakespeare’s works. The hubster and I enjoy repeat listeningd of Douglas Adams’ brilliant Hitchhikers Guide to the Galaxy (the original radio broadcast) upon which the book was based. And I re-read many favorite poets, from Dickinson to Frost, from Whitman to Cummings and more.

BIO:  Grew up in East Tennessee and earned two degrees in music. Started writing poetry as a child, which led to stories, then to novels. The debut title in my Scott Drayco series, Played to Death, was named the 2015 Indie Next Generation Best Mystery, a Library Journal featured Self-E pick, and is a Shamus finalist in the Indie P.I. category. The sequel, Requiem for Innocence, was just released. I currently live in Virginia with the hubster and enjoy flying above the Chesapeake Bay in a little Cessna. Visit my website and sign up for my newsletter at bvlawson.com. No ticket required.
Posted by pattinase (abbott) at 5:41 AM

Nice selections. I generally wait until I meet people to decide if I like them or not but fans of Douglas Adams are an exception - how could any of them not be likeable :)

Was just listening to an interview with Ian McKellen who plays an elderly version of Sherlock in the new movie Mr Holmes - there was some discussion that he is the 200th person to depict him for film or television - surely no other single character comes close?

I really like the variety of books you have, and the authors. Count me in as another one who likes Douglas Adams. Oh, and you should see my nightstand...

Nice, but...if the titles and authors face the wall how do you know which book is which?

Jeff M. (who worries about these things)

Me too! I kept thinking, how does Bonnie find the book she wants/needs? Of course, all my book spines face outward and I still can't find what I'm looking for because of double-stacking on shelves and books being I various rooms of the house.

I seldom reread books either. As you say, too much new stuff to get to.

Oh, Jeff, I hate to have you worry! Actually, surprises are nice, but I took this photo a while back when I was doing some re-arranging, and this particular pile just got pushed against the wall backwards. Feel better? ;-)

Thanks for hosting me, Patti! I've really enjoyed reading all of the bookshelf posts. Keep 'em coming!

I am heartened, and might well be able to participate now, since my tawdry overstuffed particle-board shelves are largely supplemented by stacks such as Bonnie's, rather than being handsome cases such as Rick's.

BV--thanks for sharing! Even if you did have more science instruction in university, there's Always keeping up...and ASIMOV'S and F&SF and INTERZONE and LIGHTSPEED are also useful for keeping up with sf these days...albeit the same way that EQMM, AHMM, THE STRAND, CRIMEWAVE and your favorite POD magazines and webzines help you keep up with crime fiction...