This is a new movie but one neglected by the Academy. I always wonder why only five films from the rest of the world is enough. And I also wonder if films like this one, about a middle-class family, are at a disadvantage. It is hard to compete with films about atrocities, famine and such. Many of the nominees seem to fall into that category.

When the list of foreign films nominated for Oscars came out last week, I was pretty shocked to see that this Swedish film was not on the final list. It make the short list but not the final five. I have only seen one of the nominated films (IDA, which was terrific too), but this one was equally brilliant. 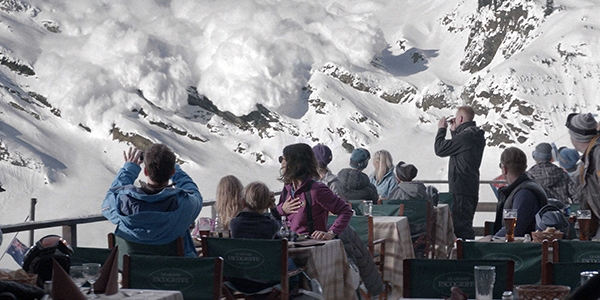 I wanted to get it up on here in case it came you way. We saw it ON DEMAND and were blown away by it.

A Swedish family takes a ski vacation. They are enjoying lunch at an outdoor restaurant when it appears that an avalanche is rushing toward them. The father (Johannes Kuhnke) tells the family it is a controlled avalanche but moments later changes his mind, picks up his cell phone, and takes off. His wife stays with the children under their table. (This was an extremely frightening scene, beautifully put together).

Two things happen: the father cannot admit he ran away and his wife cannot let go of both his failure to protect the family and his failure to admit his cowardice. The rest of the film watches their family begin to splinter under the weight of this standoff.

Some of the scenes play as a black comedy and others black as true tragedy. And the ending has an ambivalence that the director (Ruben Ostlund) is known for.  Maybe there were better films this year but this certainly is at the top of my list.

What film or performance did you expect to see nominated and didn't?

I wonder if there was an earlier movie by that title because it sure sounds familiar.

Both surprised me, Dab. Also Timothy Spalling for TURNER. But there were a lot of great acting jobs this year.

I'll have to check this movie out--sounds fascinating.

I try not to be disappointed by how political awards (and so many other things) can be, but it's hard...

David Oyelowo as Dr. King should have gotten a Best Actor nomination. I thought he was terrific.