How Seriously Is Dinner Taken in Your House? 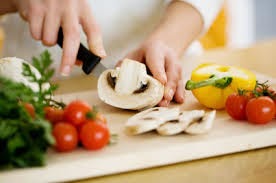 I have a friend who sits down each week and writes menus for the week ahead and then a grocery list. She shops at several stores to get the cut of meat or wine or vegetables she wants.
She cooks serious recipes from cookbooks by Julia Child and James Beard.

She was a college professor and scholar for her entire career so she is not a mere domestic goddess.

I have another friend who basically has the same dinner every night. A veggie burger on multi-grain bread and some spinach. Preparing and even eating food holds no interest for her.

At my house, Phil prepares fairly complex meals. When I cook, it is much less interesting. I come from a mother who basically cooked chops and frozen vegetables. But oh, how thin I was then.

What goes on dinner-wise in your house? Is your dinner a fairly formal affair or catch as catch can?

The Beloved Spouse and I sit down on Saturday morning and line up the menus for each meal of the week, then do the shopping. We don't eat elaborate meals--both came from meat and potato backgrounds, me more than her, but the general fare is close to that.

We like it because we never have that awkward period of standing in front of the refrigerator at 7:00 wondering what the hell to make, and we don't buy a bunch of stuff that sits around till it goes bad, with us "what the hell were we thinking when we bought this?" as we throw it out.

I like to have a general idea in advance of what I'm going to cook to make grocery shopping easier; I also try to take leftovers into account (for example, if we have pot roast one night, I'll reserve some of the meat and make stroganoff the next night). I also like to make big pots of soups or casseroles on the weekends to serve as back-up meals during the week. When all else fails, as long as there's pasta in the pantry, I can make something. I like to cook and plan meals, always have, so I don't find it an onerous task at all.

I would also add that when our kids were growing up, we were quite strict about everyone sitting down to dinner together. I would ask them to at least take a bite of new foods before rejecting them out of hand. As a result, our girls have grown up to be non-fussy eaters and one of them is already a good cook. I think dinner as a family (no tv on) is an important part of a child's development.

We tend to take turns cooking, although Lana cooks somewhat more than I do and fixes much more complex meals. The evening meal is our meal together so we pay some attention to it. We generally come up with what we're going to have the day before we actually cook it. But that's about the extent of our planning.

In the last couple of years we've changed our eating habits almost completely. Most days we eat only two meals, breakfast and lunch, with the main meal of the day at 1:00. At night we have an apple, tea and a fiber bar and a snack with fiber like pretzels.

I am a solo act. I usually make two big things over the weekend, freeze portions, and eat them most of the week, leaving a little room for whims and inspirations. I don't do much that's elaborate, but I sometimes make guisado de pollo (Cuban chicken stew) or alcatra (Portuguese-style pot roast), both of which I learned from library colleagues in Newark.

We eat like clockwork. At six o'clock because I need my meal to digest before going to sleep. If I eat later, which I do when we go out, I have trouble sleeping.
Old age has no benefits apparently.
And although Phil cooks, I usually make the grocery list, so deciding what sorts of meals we will have. We each make our own lunch.

I like to eat early, like between 5 and 6 if I had my way. When we do eat dinner it is usually by 6.

I am in charge of both dinner and ferrying the kids to their assorted activities, so while I like to cook, we end up eating fast food at least a couple of times a week. I have a stable of about half a dozen recipes that I make regularly, and a few others that take more time, which I can only make on weekends or special occasions.

Linda and I take turns and I like to cook as low effort a meal as I can. Meat, rice or potatoes, and a veggie. Sometimes one of us will get lazy and nuke a frozen dinner or pizza. Almost every Monday we go to El Toro with my older girl and the baby.

We're pretty casual in our home. I usually have an idea of what we'll have, but no formality.

We casually plan a week or so out, but no what on which day, and that's dinners only. We eat breakfast on our own, lunch the same, often at different times, but dinner is always between 5:00 and 6:00. We eat a lot less carbs than in previous times, so less pasta and rice, more veggies, soups, chicken, pork chops, an occasional beef roast, ground beef patty, during the summer we grill a steak every week or two. We usually eat in front of the television instead of at the dining room table, because Barbara watches the news and that's when it's on.

"I have another friend who basically has the same dinner every night. A veggie burger on multi-grain bread and some spinach. Preparing and even eating food holds no interest for her."

Your friend would have got on well with Ludwig Wittgenstein. He said he didn't much care what he ate, as long as it was always the same thing.

I guess he wanted to save his brain for more important things.