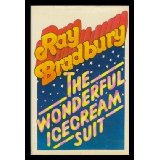 
The play tells a simple story of six impoverished Latinos living in Los Angeles whose lives are improved on wearing a vanilla white suit they purchased together and take turns wearing (sort of like the YA book about the traveling pants, I think). All six men are the same size and weight and thus can wear the suit. The suit not only allows each man to achieve his dream ( a sweetheart, a winning pool player, a guitarist, a singer, a great orator). But it allows them to extend their lives and make new friends. Much of the humor comes from their joint fear of what one of the men, a very sloppy one, will do to the suit. As is always the case for me when reading a play, it seems like it would not last more than thirty minutes on a stage. But I am sure the action in it takes as much time as the words.

Friendship is the real theme of the story, which (according to RB notes on the play) came from the writer's own relationship with Mexican-American immigrants he lived among as a young man making ends meet from a tenement at the corner of Figueroa Street and Temple in the Boyle Heights district of East Los Angeles.

"I saw my friends coming and going from Mexico City, Laredo, and Juarez," Bradbury explained. "Their poverty and mine were identical. I saw them share clothes, as I did with my father and brother..I knew what a suit could mean to them." The young writer also watched the Latina women "on the porches after a big party, like Cinco de Mayo, throwing their dresses off the tenement to other women down below. So the dresses the women used during Cinco de Mayo became the clothing the young women who owned no dresses used for the rest of the year." Bradbury turned these experiences into stories like "En La Noche" and "I See You Never," both included in his fantastic short story collection The Golden Apples of the Sun, but most extensively into "The Magic White Suit," originally published in The Saturday Evening Post in 1957.
"Well, I hung out with them!" Bradbury responded when asked how he knew these people well enough to make them characters in his play. He felt an affinity towards the men and women who inspired "Suit," borrowed their names and transferred their larger-than-life personalities into the five characters who find each other in the story: lovestruck, luckless Martinez; shifty opportunist Gomez; handsome street guitarist Dominguez; frustrated poet and thinker Villanazul; impulsive, uncontrollable Vamenos. Their lives are a reflection of the kind of noble poverty Bradbury saw all around him, with people uniting to help each other make ends meet. "They would all share their clothes, which was very common for any family who's struggling," says Collins.
The story, retitled "The Wonderful Ice Cream Suit," was adapted for a 1958 episode of the anthology series "Rendezvous" before Bradbury wrote it as a play and there would later be a musical version. It has been produced countless times over the years.

Ray Bradbury is, of course, associated with the science fiction, fantasy and horror genres. A lot of people don’t know he started out in his early twenties trying to write somewhat hardboiled detective fiction in the pulps on the 1940’s, helped and encouraged by his friend Leigh Brackett. These 15 stories were originally published between 1944 and 1948 (Bradbury was born in 1920) and you can see why he gave up the field because, while readable, many of them just don't work. In fact, I found several quite ridiculous.
As he went on and tried different things, however, he got more confident and seemed to gain greater control over his material. Nowhere is that more apparent than in one of his most famous stories (included here), 1946’s “The Small Assassin.” It may seem familiar these days but any similar “killer child” story you might have read derives from the Bradbury rather than the other way around. That alone makes this collection worth seeking out, as does the chance to see the somewhat humble beginnings of one of the most famous genre writers of the last century.
Jeff Meyerson

It must be 45 years since I read The Wonder Ice Cream Suit. Thanks for making me feel young, Patti.

I like it that most of the reviews are of the short stories or other off-kilter or lesser known works rather than the big names. I never heard of the collection Randy reviewed but I've reserved it now since I haven't read most of the stories.

I remember finding the story rather mundane when I first read it, but I should go back and give it a look with the eyes of experience. I bet it's grown some depth.

However long it si, it is too long since I read 'The Wonder Ice Cream Suit' patti - definitely remeying that tonight - thanks, and thanks for hiostig our small tributes to a great writer.

It turns out to be about friendship rather than any sort of magic. You can read it in an hour.

The link on my name is to Richard Robinson. You can just take me off the list and throw me on next week.

Thanks for the links, Patti. There are some great Bradbury posts all round to last until Monday. 2013 is going to be the Year of Ray Bradbury for me.

My link is up now, Patti.

The books are Ray Bradbury's Death Is A Lonely Business, Green Shadows, White Whale, and Christmas 2118.