Taking a week off on June 17th. If anyone wants to step in. let me know. Otherwise, we may all need a break.

Ed Lynskey, A Cry in the Night by Whit Masterson. Bantam. 1956. Originally published in hardcover as All Through the Night, Dodd, Mead & Co., 195

When Robert Wade favorably reviewed The Blue Cheer at the San Diego Union-Tribune a few years back, I was on cloud nine. Mr. Wade of the writing tandem Wade Miller is one of my favorite of the classic noir authors. Sadly, it appears the Trib’s book page got axed in these lean days. At any rate, Whit Masterson is another pseudonym used by Mr. Wade and his writing partner Bill Wade who had a fatal heart attack in 1961. They wrote some thirty novels together.

A Cry in the Night is a nifty police procedural concerning the kidnapping of a young lady, Liz Blossom, by a sex fiend, Hill Loftus. The next five hours are unrolled in tense fashion as the police investigation and then pursuit are mounted. Liz’s love interest is Owen Clark, a young Korean War vet now working as an insurance executive where he first met Liz.

A Cry in the Night garnered some critical notice when it was published. The Saturday Review called it an “A-1 thriller.” I found its writing to be first-rate, as would be expected of any Wade Miller project. Right there is enough reason for me to have reread it now. Some of the police methods like using index cards to track the sex fiends and telephone switchboards to call the patrol cars are wonderfully campy today. A few of the plot twists are based on convenience, but then cops do catch lucky breaks in their investigations.

Plus for a novel published in 1955, Hill Loftus comes off as just plain creepy. His mannerisms (leering over the unconscious Liz) and small acts of cruelty (pouring ammonia on a stray dog) make him repulsive. Nothing that graphic or gory is presented. The violence is muted and offstage. Disturbing the reader without using a hammer is a credit to the authors.

I don’t know if A Cry in the Night is available as an e-book. I didn’t see it listed on Amazon or Barnes & Noble. The online used booksellers or brick-and-mortar bookstores might be your best bet. I bought my copy for $3.50 from a used bookstore.

A Cry in the Night (1956) was also made into a B-film noir. Seventeen-year-old Natalie Wood, fresh off the popular Rebel Without a Cause, was cast as Liz Blossom and Raymond Burr played her abductor, ironic since Burr was gay. Edmund O’Brien played her father, the police lieutenant heading the investigation. Whit Masterson took the co-credit for the screenplay writer. I’ve never seen this film noir. The movie reviews indicate it has a dated feel and resorts to a didactic message given on wild, reckless youth. This came on the cusp of the free-loving, acid-dropping sixties.

Ed Gorman's fun anthology (with Dave Zeltserman) is getting the treatment this week on SPINETINGER, You can find him here. 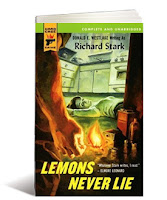 I have a large stack of HCC and I think I have LEMONS NEVER LIE here. I also have a NEEDLE and a few other neat things I am way behind on.

Patti - As ever, a nice selection of books! Thanks so much, too, for including mine :-).

A week of June 17 sounds good to me, may give me a chance to catch up on some reading.

I just want to say that I love your blog because I've discovered a LOT of great books here. Thanks :~)