I'll be away all day today and will fix up any mistakes and add a summing up late tomorrow. Thanks to all of these wonderful contributors.

‘Rommel’ ‘Gunner Who?’ is the second book in a seven book series charting the experiences of Spike Milligan during and immediately after
Margaret from BooksPlease
I'm a lifelong bookaholic and I started BooksPlease in April 2007. I t 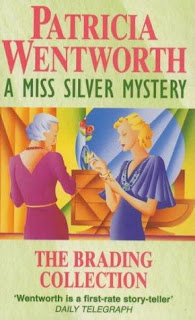 rained and worked for a while as a librarian in a local history library and then as a cataloguer. More recently I worked in local government.My blog is mainly about the books I’ve been reading and those I’m considering reading. Now and then I also write about places I’ve visited and personal anecdotes or thoughts. I like to read a variety of book genres and I enjoy fiction of most types (I don’t like horror) and non-fiction, mainly history, philosophy, religion, biography, diaries and letters.

I'm not sure if Patricia Wentworth's Miss Maud Silver books can really be considered as "forgotten books", especially as I found The Brading Collection on the library shelves. At any rate I wasn't familiar with her books so I thought maybe it would fit the bill.I knew nothing about Patricia Wentworth, except the little that was stated in the book itself. She was born in India in 1878 and wrote dozens of best-selling mysteries being recognised as one of the "mistresses of classic crime." She died in 1961 and was as popular in the 1940s as Agatha Christie and Dorothy L Sayers. Miss Silver "was her finest creation".In The Brading Collection a worried Lewis Brading asks Miss Silver for help. He is obsessed by a feeling that something is going on behind his back, that whilst he is asleep someone is entering the annex to Warne House where he keeps his collection of jewellery, most of which has some connection with crime. Miss Silver, who has been compared by some to Miss Marple, is a former governess, now a private investigator, takes a dislike to him and refuses to take on his case. However when, a fortnight later, he is shot she helps the police to discover his murderer.As you would expect there are several suspects and the sequence of events leading up to the murder are carefully scrutinised by Miss Silver, described as a ... dowdy little governess out of a family out of a family photograph ... her hair very neat, her oldfashioned hat a little crooked, her hands in their black thread gloves folded primly upon a shabby bag with a tarnished clasp.(page 148)She looks as though she had just stepped out of a family photograph album of about forty years earlier. She is never seen without her flowered knitting bag and knits throughout the book, even when interviewing people; she quotes from Tennyson and has a razor-sharp mind. Behind her appearance, she has... an intelligence which commanded respect ... an integrity, a kindness, a sort of benign authority.(page 148)It all hinges on the timing of events, when people visited Lewis in the annex, whether the door was locked and who had a key. The suspects include Lewis’s secretary, James Moberley, reluctantly working for him under threat of exposure as a criminal, and his cousin and heir Charles Forrest, suspected by Stacy his ex-wife of stealing the Brading family necklace to fund the conversion of his family home into flats. Then there are Myra Constantine, who looks like a toad, ugly and venomous with flashing black eyes and her daughters, Milly and Hester, insignificant and bullied by her mother. Why does Hester enter the annex late at night? Is Lilias Gray, Charles’s cousin a reliable witness? It all builds up to a climax with a dramatic ending, involving a car chase, reminding me of cops and robbers films, as the culprit drives off in a police car, chased by the furious Inspector Crisp.
All in all this is a satisfying book, with believable characters and plenty of surprises, although I had worked out who did before the dénouement. I’m glad I found Patricia Wentworth and as there is a long list of her books there are plenty more to read.

Richard S. Wheeler is the author of sixty-nine contracted or published novels that largely deal with the American West. These include historical novels, biographical novels, and traditional western fiction. In recent years he's been writing mysteries, including some set in the upper Midwest, under the pseudonym Axel Brand. I've also written numerous short stories. You can find Richard here.

This great work by Berg shaped me. It deeply affected how I think about literature. It changed what I aspire to in my writing. I am not the same person I was before this book entered the place of honor on my shelf. I lost my father, whom I loved and admired, when I was young. All those authors he nurtured lost a father when Max Perkins died.

Rick Robinson: Killer in the Rain

These stories by Chandler are both less and more than they seem. Every one of them was cannibalized by him and became part of a novel. Sometimes it was a character or two who made the transition, more often it was whole pieces of plot, in some cases the entire story became a novel, with only more plot and a few name changes.
In his informative introduction, Philip Durham traces the publication and cannibalization of these eight stories, part or all of which became The Big Sleep, Farewell My Lovely and The Lady in the Lake.
None of the stories in this collection appears in Chandler’s 1950 “official” short story collection The Simple Art of Murder. Once Chandler cannibalized a story he believed it should be buried, so the stories were left to fade away with the pulp magazines in which they were originally published, thus none of these stories was published by Chandler during his lifetime, though three were published in collections. “No Crime in the Mountains” appeared in Great American Detective Stories edited by Anthony Boucher (1945), “The Man Who Liked Dogs” appeared in Joseph Shaw’s The Hard Boiled Omnibus. (1946) while “Bay City Blues” appeared in Verdict (1953). Chandler maintained these stories were published by mistake and without his permission.
I bought this collection when I first discovered Chandler, and I enjoyed it greatly. It was my introduction to his writing, and I read it, Simple Art and Pickup On Noon Street before I ever got to one of his novels. When I did start on the novels – with The Big Sleep if I recall correctly - I was so enthralled I didn’t notice the pieces of these stories. Or I may hav e and just don’t remember now.
This collection is easy enough to find through the usual used book channels, and while these stories are not in the two volume Library of America set of Chandler’s works, they are to be found in the 1,300 page Raymond Chandler: Collected Stories published by Everyman’s Library, which contains all of Chandler’s short fiction, mystery and other. Whatever the source, it’s worth seeking these out. Very highly recommended.

BSquared
I am an Australian who loves to read, travel and take photographs and when I can combine all three I am in heaven. I've always had a preference for mysteries and crime but over the past couple of years seem to have read almost to the exclusion of all else.

I've got one, the sequel to last week's Tarzan of the Apes at my blog: http://scottdparker.blogspot.com.