Hamtramck was originally settled by German farmers, but Polish immigrants flooded into the area when the Dodge Brothers plant opene

d in 1914. Poles still make up a large proportion of the population. It is sometimes confused with Poletown, a traditional Polish neighborhood, which lies mostly in the city of Detroit and includes a small part of Hamtramck.

Over the past thirty years, a large number of immigrants from the Middle East (especially Yemen) and South Asia (especially Bangladesh) have moved to the city. As of the 2000 census, the city's foreign born population stood at 41.1% making it Michigan's most internationally diverse city. 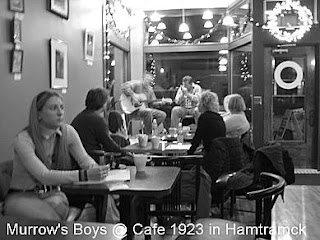 The city has grown increasingly ethnically

diverse but still bears many reminders of its Polish ancestry in family names, street names and businesses. A recent survey found 26 native languages spoken by Hamtramck schoolchildren. The city's motto was "A League of Nations".

At the time of the 2000 census, Hamtramck was

again experiencing considerable growth, with over 8,000 households and a population of almost 23,000.

In 1997, the Utne Reader named Hamtramck one of "the 15 hippest neighborhoods in the U.S. and Canada" in part for its punk and alternative music scene, its Buddhist temple, its cultural diversity, and its laid back blue-collar neighborhoods. And in May of 2003, Maxim Blender selected Hamtramck as the second "Most Rock N' Roll City" in the U.S., behind Williamsburg in Brooklyn, New York City. Hamtramck is home of several of Michigan's most distinguished music venues.

In January 2004, members of the Al-Islah Islamic Center requested permission to use loudspeakers for the purpose of broadcasting the Islamic call to prayer. This request set off a contentious debate in the city, ostensibly about the noise that would be caused by the call to prayer, eventually garnering national attention. Ultimately, Hamtramck amended its noise ordinance in July 2004 regulating the volume level of all religious sounds.

Most of this was taken from Hamtramck's website. People go to Hamtramck for several things: first of all they have some darn good Polish food (see illustration of paczkis, a traditional Lenten donut); second, it's the place to find experimental music, art, and theater. It's interesting also for the culture clash underway per the call to prayer argument above. One thing it isn't, is pretty. The housing is bare bones, the streets are poorly paved, there's not a lot of decorative touches. But Hamtramck will always be an interesting, ethnically diverse place. Authentic to its core.

Hamtramck is one of two independent cities within the confines of Detroit. I wonder if other cities have such a thing.

Check out more MY TOWN MONDAY posts at the blog of Travis Erwin, Master of Ceremonies.

And reading it was the first time I realized that Hamtramck doesn't have a third 'a'. I always thought it spelled Hamtramack. Heh.

It's cool that there's so much diversity in that area. At least there are a few people that aren't fleeing Detroit completely. =P

I need to miss them more!

besides size, I think our towns have a lot in common..the food and the music for one...ha...thanks for stopping by ..jackie
my girlfriend in austin, texas is polish and introduced me to perogi's...oh my ...they are soo good..we call them peedoggies..

Very interesting. I just never know what you're going to come up with for these MTM posts, Patti!

Hamtramck...1973...before I traveled all over the nation by foot...the only town I have ever been arrested in. ("Dismissed" said the judge)

Also the birth place of Techno...way back when it was a beginning sound the DJ's didn't feel they were getting respect for their art so they took off for Europe where the music acquired a new name "House"...which in turn became the most popular club music on the continent.

Say no more. My wife and I love Polish food and it sounds like a great place to visit.

David-Come visit and stay with us!

WM-Methinks you have many stories to tell.

So is it properly pronounced the two syllables, or three? My Michigan cousins always say "ham-tram-ick." I will admot. trying to pronounce it exactly as it's spelled can lead to a recurring tongue injury.

Three Ham Tram ick, it is.

There's a lot of cultural diversity in your town, Patti. Do you think it's industrial roots are a reason?

Immigrants are no longer coming from Poland but instead the ones turning up in Hamtramck are from Bangladesh and the Middle East. As younger Poles grow up, they are tending to look for greener pastures--out of Hamtramck and out of Michigan.

I'm an English Gypo but living in Poland for years ..at's life. enjoy...

Sounds wonderful! There is a little Polish bakery just down the street from my apt. Good stuff!

Very interesting. I can understand the loudspeaker issue, though. When I'm sleeping in, I don't wanna hear NUTHIN'!

A city within a city. No we do not have any of those that I am aware of though this reminds me of a story that happened to me one time while I was at technical training in Norman, Oklahoma. I'll try to tell it over on my blog sometime later this week.

I had no idea; what a cool enclave, Patti! Aloha

What an interesing town. My present hometown, Anaheim, was also founded by Germans but is now ethnically diverse. Though primarily Hispanic, we also have lots of Asian and Middle Eastern residents, though on one would call the town "hip". ;)