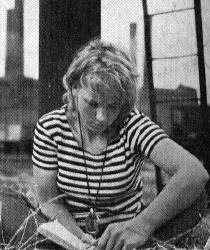 
The nearly year-long list of forgotten books can be found here.

Next week we're remembering forgotten stories. I expect to mostly post links but if you don't have a blog, send me your story by Wednesday, April 8th. I'd love to have your choice.

Alison Janssen is an editor for Bleak House Books. Look at their upcoming books right here. 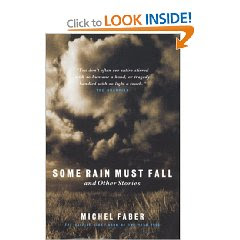 ust Fall and other stories by Michel Faber

I return to this collection of short stories again and again. Faber is probably best known or The Crimson Petal and the White, which I also enjoyed, but this book was my introduction to his writing. The stories are surreal, inventive, crisp, and evocative. My special favorite is "Fish," in which sea creatures have learned to swim through the air, and a mother and her young daughter fight to survive. It's terrifying and wonderful -- which is my kind of book.


"Evan Kilgore is the author of WHO IS SHAYLA HACKER and THE CHILDREN OF BLACK VALLEY. He is a graduate of USC’s Film School, and he lives and works in the Los Angeles entertainment industry."

RD CHRONICLE by HARUKI MURAKAMI
--
It is almost summer – a season traditionally filled with brainless, big-budget blockbusters at the box office and page-turning beach reads on the shelves of the local bookstore. Paperbacks designed to fit in airplane carry-ons, pages stained with sunscreen and sandy fingerprints. But summer can also be a time of warm, dreamy evenings – the afterglow of the day still fading from the sky. Twilight in late June and July has always seemed to carry in it a certain oddly mystical quality, and, as such, it seems the perfect time to crack open a copy of Haruki Murakami’s The Wind-Up Bird Chronicle.

To call this warped fever dream of a book a mystery would be missing the point. There are certainly plenty of mysterious qualities to it – and indeed, the inexplicable becomes as consistent a theme as anything else over the course of its 607 pages – but such a generic label is insufficient to capture the truly bizarre essence of what Murakami has created. The world of The Wind-Up Bird Chronicle seems to be the type of place that might manifest itself after spending just a little too long alone in a silent house with only blank white walls for company.

Stranded in the suburbs of Japan, the book’s protagonist, Toru Okada, drifts from chore to household chore, cooking and doing laundry, and busying himself with peaceful resignation from the outside world. Having recently quit his job, he lives off his wife’s wages while he waits for his life to find its own direction, in its own time. By itself, it is a world of ennui and mind-numbingly stagnation, but in Murakami’s hands, it is also a world skewed toward the strange and even disturbing.

Take, for instance, the mysterious phone calls Okada begins to receive, probing him for intimate information about him and his wife without explanation. Or the disappearance of his cat, Noboru Wataya – named after Okada’s erstwhile brother-in-law, who is rumored, also, to be a nefarious white-collar sex criminal – that leads him to meet a vivacious and oddly morbid 16-year-old neighbor who blurs the line between friend and stalker.

As his wife also disappears for vaguely sinister but not entirely apparent reasons, a cast of increasingly odd characters begin circulating through Okada’s life with a certain dreamlike rhythm - bringing with them a plethora of haunting stories that begin hinging increasingly toward the fractured and bizarre. Among them, the bland details of everyday life are shaken up by momentary flashes of genuine horror, such as that of a character who describes atrocities he has seen in the forgotten Japanese/Manchurian campaign of World War II that proves to be quite possibly the most disturbing such account ever written.

The Wind-Up Bird Chronicle is not a journey to be embarked upon lightly, nor is it likely to appeal to anyone seeking quick thrills, white-knuckle action, or even a particularly coherent plot. But as such, it is the perfect realm of hazy quasi-enchantment to explore on a sweaty summer evening, when the air is still and the heat of the sun lingers in the walls and the carpets and the grass outside, and, for a few hours, anything seems possible.


Ed Gorman knocks around the crime writing scene now and then. Find him here.
Rogue Cop by William P. McGivern 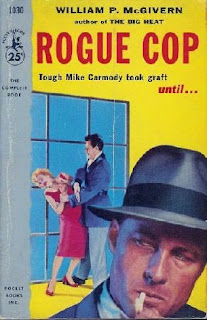 As the title tells us, this is a novel about a crooked cop. The time is 1954 and the city is Philadelphia. It is a Hammett world of civic corruption and violence.

Carmody is a competent detective but a bad guy, having been on the take so long that his allegiance is to his mob bosses rather than the police force itself. But now there is problem. His younger brother Eddie, a patrolman, eye witnessed a murder and can identify the killer. The mob wants Carmody to make sure his brother doesn't testify. They hope Eddie will take a bribe and relent. But Eddie is a good cop and refuses.

Editors of the pulp era always talked about "narrative drive." Well this narrative will flatten you like a speeding bus. William P. McGivern graduated from the pulps (he worked a good deal for the Ziff-Davis magazines of Chicago) and learned how to keep the reader in heart attack mode. The scenes of Carmody pleading with his brother to forget about testifying--and then trying to placate the mob so that they won't kill Eddie--are classic moments of desperation.

I mean no disrespect when I say that I always considered McGivern a road show version of Graham Greene, a writer he clearly admired. Though his novels were never as rich or in some cases sly as Greene's, in their blunt American way they were compelling looks at our society and our ideas of success and loyalty and honor. There is real power in his best work and that work certainly includes Rogue Cop with its two soiled doves and its sad earnest look at the process of redemption.

I don't much care for the movie that was made of this. Robert Taylor is too slick and wooden to play a beast like Carmody. In various forms and under many different titles this movie has been remade many times and much better as "homages."

McGivern died way too young, early fifties of throat cancer. Most of his author photos show him with his pipe. He had a successful career by any measure and in his last years wrote the enormous (and excellent) bestseller Night of The Juggler. For me his finest novel is Odds Against Tomorrow which Robert Wise turned into a fine movie despite the fact that Harry Belafonte was never much of an actor. Robert Ryan and Ed Begley both made up for what Belafonte couldn't deliver.


JERRY HOUSE likes Bill Crider's books, devil dogs, and golden ginger ale -- not neccesarily in that order. He can be reached at house_jerry@hotmail.com.

This volume is just the thing for those of us who love forgotten (and not-so-forgotten) paperbacks. Bill Crider kindly shares his knowledge and interests, providing separate discussions of paperback publishing lines, both large and small. A dash of history and a nod to significant contributions from each paperback publisher make this a fascinating read, perfect for dipping into and as a reference.

This is a book that is crying for a new, updated edition, but for that might keep Bill from expending his considerable talents on the always interesting doings of Dan Rhodes. G. K. Hall, 1982.

Since that book was published, I've started using my street name, Jerry.

Patti: I'll have something for next weeks special edition; a story that's technically a song that was riffed into a book that I haven't read yet. [There's also a Michigan connection.]
Details by Weds.
John McAuley

I'm freeing up some time for next week for sure.

I haven't got my hands on a copy of ROGUE COP yet, but McGivern wrote VERY COLD FOR MAY, which I thought out-Nick-and-Nora'd Hammett's THE THIN MAN.

Patti, Forgotten Author on my blog is Mary Willis Walker for anyone to check out. :)
Much love,
PK the Bookeemonster