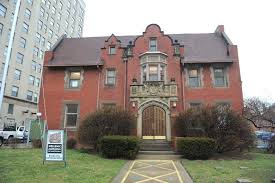 Housed in a 1912 red brick mansion right across East Kirby from the Detroit Institute of Arts, the museum — with a total investment so far of about $2 million raised from foundations and individual donations — will add yet more oomph to the Cultural Center at the north end of Midtown, joining the Charles H. Wright Museum of African American History as the district's other ethnically focused institution. With eventual plans for exhibits, lectures, films, cooking classes and music and dance performances, the Hellenic Museum will round out weekend entertainment options for the culturally inclined.

The museum is starting small, however, and many of those plans will take shape slowly over the next year. For the foreseeable future, the museum will only be open Saturday afternoons while work, mostly out of sight, continues.

"Keep in mind that this building was vacant for 10 years," says executive board president Ernest Zachary, whose real-estate development firm is located just a few blocks away. "So we had to put it back together. And we're still doing that. There were a lot of leaks, buckling floors and cracked plaster."

Visitors strolling through the galleries, however, are unlikely to be aware of that. The house, with a renovation plan by Elisabeth Knibbe — the same architect who did the Inn on Ferry Street right behind the museum — will feature a first-floor exhibition on the history of Detroit's Greektown that Wayne State University students compiled, while the wider story of Greek history, complete with a useful timeline from 4,000 B.C. to the present, will be presented in three rooms on the second floor.

Upstairs, don't miss the dark green, 19th-century wedding dresses in a room devoted partly to examples of the national costume. Downstairs, in addition to its own timeline and historical photographs, the Greektown exhibit will include colorful artifacts such as the actual front door — complete with a bas-relief sculpture of a 19th-century Greek freedom fighter — from the old New Hellas Restaurant on Monroe Street that closed several years ago.

Stephanie Vlahakis, past president of the National Hellenic Museum in Chicago, helped advise the Detroit founders, and tips her hat to their feat in pulling off a new museum in the midst of a down economy. "Tenacious individuals make miracles happen," she says.
The museum has also benefited from the generosity of its neighbors. The College for Creative Studies sent students over to help with labor, while students at the University of Michigan's landscape architecture program worked up a plan for the grounds that Zachary says will be implemented. And for the past several months, 12 students from Marilyn Zimmerman's Art as Activism course at Wayne State University have undertaken much of the archival research to pull together the Greektown exhibit.

Wayne State junior Che-Lin Aldridge, who went through hundreds of historic photos for the museum, sees it all as part of the dizzying ethnic tapestry that comprises the greater Detroit area.

"It's so interesting how cultures blend together," she says. "I'm African-American but spent lots of time in Greektown while growing up, whether playing pinball, going to Pegasus or," she adds with a laugh, "the Golden Fleece for breakfast at 2:30 in the morning."
___
I
Posted by pattinase (abbott) at 7:00 AM

Buffalo has an active Hellenic community, too. Great people and great food!

Unfortunately, the Greek food in Detroit is circa 1955 and not like any Med. diet. Veggies cooked into mush, soggy salads, overcooked lamb. They need to send their cooks to Greece and find out what Greek cooking is really like.

I grew up in a town next to Lowell, Massachusetts, which has a strong Greek-American community. I love good Greek food and will eat it whenever possible. Send your Detroit cooks to Lowell for training -- it's cheaper than sending them overseas!

This is the problem: there is an older community that likes their food this way-they grew up on it. They want flaming cheese, soggy iceberg lettuce salads, and similar fare. Their idea of Greek food bears as much similarity to real Greek food as American Mexican or Chinese does to the real thing. All of it has been tampered with to suit the blander American palate.

Oh, Patti, this looks like a great place and really interesting. It's amazing how many Greek communities there are in the U.S.