Flash Fiction Challenge-The challenge was to use the line "With gas/ (diesel/petrol) prices rising, our (their) plans had to change" in a 750 word or less flash fiction piece.

Me and one of Jerry's Hummers

Epitaph for a Hummer

Jerry, my boyfriend, he loves to steal cars. Loves to see how quick he can make an engine roar to life using the tangle of wires, switches and pins he carries around on an old dog collar. Does most cars in ninety seconds flat, his favorite being those big-assed Hummers, a model I don’t particularly care for. Me, I’m short. Hoisting onto that seat’s a bitch.

Finding a Hummer in our neighborhood is rare and nearly impossible for Jerry to pass up. Says he only feels alive when he’s behind the wheel of a luxury car and especially one with some muscle. He never parades it at the car show behind the crank factory, never strips it for parts, never crashes it for kicks. He just keeps it for an hour or two then parks it in a safe place. He’s got a code, my Jerry does.

Jerry likes me to come along for the ride, says it’s more fun when someone sits shotgun. So most Friday nights, we find a god-damned (his words) Hummer and ride around till it’s time to go home. He likes to hit the toney neighborhoods over in Shelterville first, then head out to the country. You never lived till you did a hundred in a Hummer on a deserted blacktop.

But with gas prices rising, our plans had to change. Cost $85 last time we gassed one. Sometimes we’d hop in and find the gauge on full, but less and less since Bush got bogged down with the war and neglected his domestic duties. Last Hummer we took was only running on the recollection of fuel. It’s not worth the trouble if the owners won’t leave us a little gas. And Jerry says, he’ll be doing the death polka before he puts his dime into someone else’s Hummer.

I tried to talk Jerry into stealing an economy car. First time I said it, he told me it wasn’t hardly worth risking jail for a ride in a Cobalt or a Civic: there was no joy for him in taking such a vehicle. But when prices hit $4.00 a gallon, he gave in and we 211’d a Yaris—a car we’d never even heard of, Jerry shaking his head as the car sputtered to life like a sick pup in a litter. You could tell it was a family car right off from the infant seat in back.

“Bad luck,” he hissed as we coasted down the street. “Bad luck to mess with babies.”

It was too dark to see good, but no baby was sleeping in that seat. Not unless his parents had him stuck headfirst in that old brown bag, like a candle at an Italian restaurant.

“What is back there, Babe,” Jerry asked, pulling out onto the highway and sneaking a look in the mirror. It was clear somethin’ was pudging out that seat. I reached back and felt around.

“Feels like money,” I told him. “Money in some kinda sacks.” I could smell burlap and wasn’t sure it hadn’t carried manure in its heyday.

“Money?” Jerry repeated, his voice full of wonder. The Hummers we normally grabbed didn’t even carry an old umbrella or a box of Kleenex. Those Hummer people like to keep ‘em clean. I dug inside and pulled out a bundle while Jerry switched on the overhead. Fifties, twenties, and a goodly amount of ‘em in every rubber-banded stack. I won’t even tell you what Jerry did with that first lot.

We ditched that Yaris pretty quick. The owners wasn’t gonna forget about it for long, but they probably wouldn’t call the cops either. Jerry and I had ‘em between a rock and another rock. We took the bags to Jerry’s garage and fanned ‘em out. More dead presidents than we could rightly count. You lose your place after a while with stacks that big.

“What the hell,” Jerry said. “I sure never thought an economy car would bring me good luck.

“What I tell you,” I reminded him.

Next day, we went to a showroom over in Shelterville and got ourselves a sweet deal ‘cause nobody’s buying Hummers nowadays. Dead black, it was.

“Might be the last one off the line,” the dealer said. Jerry practically burst with pride.

There’s enough left over to keep us in gas if those Sawdy bandits don’t raise the price again when Bush isn’t looking. Which he never is.

Jerry and our new Hummer 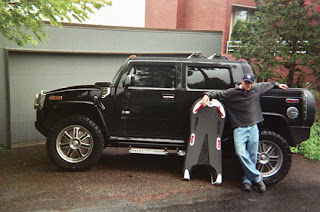 This story is dedicated to the real Jerry, who stole cars in 1963. I hope you've given it up.

I think you've summed up America's discontent and wrapped it in an entertaining story with a happy ending. Good job.

Patti: What a wickedly great wee tale on so many levels:)

Thanks, John. Hope everything's okay at Powder Burn. If it's not up soon, I can post it here and Sandra's too. I think Aldo's on the west coast though. Should be up soon.

Great story, Patti! You certainly took me by surprise with the money, I thought sure with the child seat that they'd probably found a bag of dirty diapers, but then I always think worst case. Great fun ending!

Thanks, Sandra. Hope Aldo gets yours up soon. If not, I will post both yours and John's on here tomorrow. Something must be delaying it.

Great story! I loved the ending. :)

Loved it, never would have guessed money in the bag!

Thanks, guys. And thanks for writing/reading.

Late to the party, but I made it: http://noirwriter.blogspot.com/2008/06/patti-abbott-flash-fiesta-gas.html

Just wanted to say thank you to Patti, Gerald, and Aldo for hosting this challenge. All the stories were great and such fun to read.

They were great, weren't they. Similar and yet different. Thanks so much for participating, Sandra. We'll have to do it again in the Fall. Also enjoyed reading your story on Spinetingler. I do miss Tribe's site. I talk to him (on email) occasionally but he doesn't seem interested in reviving his site or his blog. Too bad.

Thanks, Clair. It means a lot coming from you.

Liked the story and the style. Liked your story in Prisoner of Memory even better. (We're a couple of tales apart in that collection.} Keep up the good work.
DA