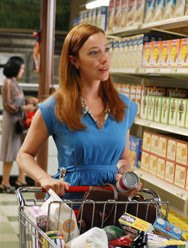 It's too soon to judge after only one episode but what I witnessed on the initial episode for Swingtown last week is just what I fear will happen to Life on Mars should a U.S. studio make the series.
Life on Mars, a series shown here on BBC America told the story of DCI Sam Tyler, who for some unknown reason is transported back in time to the nineteen seventies. The show combined an exciting police procedural with a genuinely compelling and heart-breaking personal story. The show certainly used references to the seventies, but never pounded your head with them. They were subtle and often in the background.
Swingtown did not have a single frame without huge seventies' signifiers: music, fashion, products, word usage. They used these signifiers, in fact, as a major character. Mad Men last year sometimes pushed their sixties references a bit too far too, but they were commenting on that culture so it worked. Here it is just laziness or a belief their audience needs constant reminders of where they are.
Oh, please leave Life on Mars alone. It was perfect as it was. I know I said this about The Office and was proven wrong, but this is very different sort of show. Let Sam rest in peace.
Posted by pattinase (abbott) at 12:59 PM

According to the commercials the entire premise for Swingtown was the swinging seventies, so I left it alone. Thanks for confirming it was a good decision. I, like you, have little faith in what the producers think the public will like.

I haven't seen Life On Mars, but from the description, I'm not sure Swingtown was supposed to be a remake of it. The only thing the two shows seem to have in common is the time period. Yes, Swingtown is lacking in subtlety, but isn't that SOP for American TV? Hollywood just doesn't do subtlety well, if at all, lol.

Like me high school English teacher used to say, "To each his own; that's why we have chocolate, vanilla and strawberry".

They're remaking Life on Mars now and I'm afraid they will feel the need to wave all the seventies banners in the air and ruin what was an excellent show. I was only comparing the use or overuse of the seventies.
Sorry if I wasn't clear.

First of all, The Office has become impossible to watch. It's crossed the line and the characters are just sad and I feel sorry for them. I feellike I'm intruding on their personal lives. The faux documentary style just doesn't work for this long. I think the Brits know when to stop but American networks want every show to be Gunsmoke.

Now, I was going to say it was the first show, maybe give Swingtown a little more time - lots of shows don't get going till they've got five or ten episodes done, but -- Swingtown? What were you expecting with that premise? (and I know how this sounds coming from me after what you just read ;)

I just finished watching the first season of Life on Mars and it was fantastic. I'd love to see a US version, but what city would it be set in?

I lived in Manchester for a year and there's no exact replica. Poor, gritty, but some pretense of culture. Maybe Philly.

And completely reborn. The opening of Life on Mars is fantastic when he gets by the car under the billboard of the future city.

I guess they could do the scene in Times Square in New York?

Sure but Ny gets it all. I'd love to see them use the equivalent of Baltimore in The Wire. Something unexpected and less glamorous. Manchester never looked glam. How about Cleveland? Maybe Windsor, Ontario? A real working class city.

Except Manchester is glam now (since the Pan Am Games - probably didn't get much mention in the US), that's one of my favourite things about the show, the transformation of Manchester.

(there's a great scene in a factory, the employees worried about losing their jobs and Sam is amazed because it's the building his condo is in)

I have a sci fi image of Detroit when all those expressways are used for high speed trains and people live downtown again.

I don't think Baltimore has changed much beyond the waterfront area. You'll see if you go to Bouchercon.
Manchester wasn't glam in 1995 when we were there. Although it was lot nicer than Salford where my husband taught. That was quite a horrible city.

I've visited oop North to Manchester about 3 times in my life.....rained every time......talk about depressing

Yes, it did rain relentlessly. Prepared us for Amsterdam a year later.

Offhanded comments I made on SWINGTOWN and FEAR ITSELF, from the Horror List at Indiana U:

Not so much to fear from FEAR ITSELF, I fear, to judge from the pilot. I was able to watch the screener tonight before the broadcast, but while catching the pilot to the not-too-shabby SWINGTOWN, CBS's recent-historical soap running alongside NBC's ER-slot filler, I flipped over during commercials and noted how much the commercials broke the flow, but more annoying were the bottom of the screen promos and bugs on broadcast. Not that SWINGTOWN was safe from these, either, mostly to advertise "LostFM"'s new SWINGTOWN "channel"...because there's a real lack of opportunity to hear mid-'70s top 40 on radio generally. Oh, wait.

Scriptwriter and fictioneer Stephen Gallagher has joked that he's come over to the US to write for television so that he can work with British actors, and SWINGTOWN's all-American couple are portrayed by Canadian Molly Parker and Briton Jack Davenport, the latter still getting his Yank accent down...it sounds remarkably like his intentionally fake Australian accent in an episode of COUPLING. And perhaps it's telling that SWINGTOWN's pilot and "Sacrifice" both end with Telling Glances from their female leads.

I'm so with you on "Life on Mars." When I heard they were making a US version, I cringed. Here's hoping they don't muck it up.

That said, I think "Swingtown" may have some promise - not for the adult storyline but for what's happening with the kids, who seem confused and interesting.

I heard Colm Meany on the radio over here (UK) a wee while ago, and he said there was a pilot being filmed first.I think he's in as Gene Hunt.

He was pretty good in something by Roddy Doyle a few years ago that stuck with me....The Van, if my memory serves me.

Otherwise I've only seen him in Deep Space 9 or some other sort of Star Trek space thingy....might even be Star Trek for that matter.

That's great news. He's one of my favorite actors and he'll be perfect in that part.

Clea-I'll give it another week. Certainly it has its pluses. But why do they think we need reminders of where we are. Even Happy Days was more subtle in depicting the 50s.
I was twenty in the seventies and I can assure you that I didn't swing and no one asked me to. Darn.

Clea Simon is correct...the storylines with the kids are certainly more interesting and less clumsily tied to the premise than those dealing with the adult characters...even if not much new ground is being broken here, in the wake of THE WONDER YEARS, THAT '70S SHOW, and CHINA BEACH. Happily, it's usually not quite as broad as the two sitcoms.

Haven't seen the second one yet. At the movies seeing The Fall. I dvrd it though.