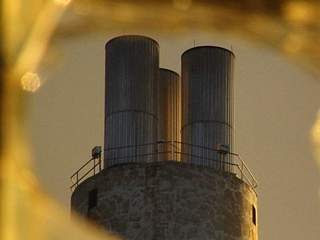 It’s been 20 years since the inception of the idea that an incinerator was the answer to ’s trash problems. Landfills that leaked and a shortage of them led to the construction of the nation’s largest incinerator. The City is deciding now what to do about it as the lease runs out today. It sits at the intersection of two of ’s most highly traveled freeways, as if its is something you’d want to see as a tourist.

As you might guess, environmental groups have been on the offensive for the entire 20 years with plenty of statistics about the increase in incidence of cancer and breathing difficulties to back them up. Live east of this structure (as I do) and you’re breathing in toxic air most of the day. To the immediate east, sits the city's poorest neighborhoods. The asthma rate among children there is off the charts. is right there too and the odor some days brings tears to your eyes.

It’s been hugely expensive to pay for this monstrosity, necessary even to import trash to burn to meet the fees. does little to recycle and has little reason to increase recycling with this structure at its center. That also means that pretty much everything we throw away goes into it… and out of it.

The City decided yesterday they were going to allow the lease to expire. This means they will have to return to landfills and recycling or purchase the facility themselves.

Sounds like this is one dinosaur that needs to go extinct.

I can only pray. But never overestimate the backward thinking of Detroit.

At least you can see what you're breathing. Hopefully they will go in the green direction. I use to play Sim City, in the game Detroit had pollution, unemployment and crime to deal with, not an easy scenario.

It's hard to believe that there isn't a way to make that thing burn cleaner -- it seems like more recycling and a cleaner incinerator would be preferable to opening up more landfills. Isn't that an option? I suppose it must not be or you'd have mentioned it.

It's hard to convey how poor Detroit is. Also how incompetent and corrupt.
The steets aren't cleared of snow in winter, houses are falling down on every block, the schools are a disgrace, with a graduation rate of less than 25%. We have a great museum, some great sports' teams and a few other bonuses. The suburbs are a different matter.

Patti...hope you see this. Been trying to email you but your address keeps bouncing my email back. Is there an alternate?

Brett-pattinase@gmail.com;aa2579@wayne.edu;aa2393@wayne.edu
Sorry for the trouble.

Oh my goodness, only 20 years old and I expect the damage caused is huge. Here in England we are using recycling as an extreme sport!! Its mind blowing to sort out the rubbish, box for plastics, crate for glass and tin, another box for paper, but not all paper, no directories or waxed paper, the list goes on and on. I think I would be happy to see the back of that!

How many times have you cut yourself preparing a tin can for recycling? They've got make them more recycler friendly.

A bad idea sure doesn't get better with age, does it? It'll be interesting to see what is next...

Sounds like life without the incinerator will be an improvement for a lot of people.

I think it will make a big difference if they don't decide to buy the thing themselves. We'll know in July.

I'm embarrassed to say that Toronto exports its trash to Detroit. The City Councillors have been bickering about where to put the garbage when Detroit's incinerator closes. No community within 150 miles of Toronto wants a landfill.

Landfills are not the answer either. Microbes are placed in the material to eat away the debris. Not a healthy place for a human or animal.

Sometimes in the summer a smoky haze settles down over Toronto bringing particles that make your eyes tear. I've heard explanations of forest fire smoke from up north; but the ones who say such things haven't noticed the direction of the wind coming from Detroit or Philadelphia. There must be a way to bring the spewing of fumes into the air we breathe to the attention of the powers that be. I have written strong letters to government officials here and gotten results in the past that benefit others. I'll think on it a bit and let you know.

Sorry, I meant to say Pittsburgh, not Philadelphia. Writing in haste is never the way to go.

Detroit has sought out places like Toronto to meet its financial obligations. Sigh. Well, at least we don't pile it on barges and put them to sea on the Great Lakes. Or do we? What a mess.

Detroit seems to do a pretty good job to make sure no one really wants to live or work there... ;-)

Which is a shame especially with all the history of the Ville de Troit...

It is menacing. You should drive by it!!!
Reasons I like living just outside of Detroit: Art Institute, Sports' Teams, Cultural Activities. Musical offerings. As bad as it is, I'd rather live here than a place without the above. And the suburbs offer still more: access for foreign films, lots of bookstores, restaurants with every ethnic cuisine.