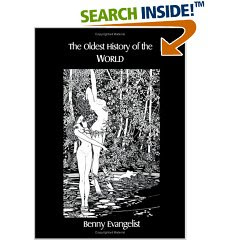 (Sorry about the size here. Unable to shrink it)

One of ’s strangest murders was that of Benjamino Evangelista, who came to the to improve his lot. As Benny Evangelist he made his way from to , where he found God.

In 1906 he began experiencing religious visions and shared it in The Oldest History of the World Discovered by Occult Science. His intended four-volume work covered all of history through the resurrection of Jesus, including the birth of God himself. He never completed volumes 2-4, 1 ending well before the Flood.

As a psychic Benny received as much as $10 for private "readings," during which he called upon the powers heal various ills, either spiritual or physical, with which his "patients" were afflicted. He lived with his wife and four children on St. Aubin’s Avenue in .

Evangelist was murdered by decapitation on July 3, 1929, along with his wife and their children. The police initially jailed a friend of the family, who had suspicious weapons and newly washed shoes in his barn. Nothing of value was missing in the house.

In the basement, the police found eight or ten wax figures, each presumably representing one of the "celestial planets," suspended on the altar by wires from the ceiling. Among them was a huge eye, electrically lighted from the inside, which Evangelist referred to in his bible as "the sun."

The walls and ceiling of this "religious sanctum" were lined with light green cloth, which bulged out in places like the walls of a padded cell. In a window of the basement, which was on a line with and visible from , a large card bore the words: "Great Celestial Planet Exhibition."

The murder was never solved.

I guess we'll never know, unless one of us adapts the story and makes up a cool ending.

Cults have always rubbed us the wrong way, I think. I've thought about doing it but research the twenties is more Megan's thing

"Cults have always rubbed us the wrong way, I think."

And yet they keep growing and new ones keep sprouting up all over the world.

There's something to that, Patti. Do you think it's just because they question our beliefs? Are we so insecure in what we believe? Why do cults rub us the wrong way, I wonder, when usually they're no threat to us at all - unless we have a relative or friend who joins?

Fanaticism rubs me the wrong way. And then there's the problem of cults being totally controlling, cutting a member off from anything that might divide loyalties. Neighbors of Evangelist probably saw him as luring their children away. It would make a good story, perhaps written from his wife's POV, someone helpless to stop him and fearful for her children.
I think they keep growing because people are anxious to give someone else the reins. It's tough being out there in a meaningles world.

Fanaticism rubs me the wrong way. And then there's the problem of cults being totally controlling, cutting a member off from anything that might divide loyalties. Neighbors of Evangelist probably saw him as luring their children away. It would make a good story, perhaps written from his wife's POV, someone helpless to stop him and fearful for her children.
I think they keep growing because people are anxious to give someone else the reins. It's tough being out there in a meaningles world.

Fascinating post and great discussion her in the comments.

A guy like that could have been targeted by any number of people.

What an utterly creepy, fascinating story. Has anybody ever used this as inspiration for fiction? This is just the germ for a million possibilities...so strange, violent and bizarre.

No one's used it that I know of. Have to do a bit of research but it could be brilliant.

"Neighbors of Evangelist probably saw him as luring their children away."

Yes, I think that's the story, too. How insecure we must be to think that our children can be lured away so easily by something so extreme.

We really have no faith in our kids at all, afraid that every tiny reference to anything 'bad' will affect them deeply.

And, I guess, we have no faith in our beliefs, either, feeling that if they're questioned the least little bit they'll collapse.

There's a story there all right...

What a great mystery. I agree that it has the ingredients for a great fiction piece!

The unsolved crime should perk the antennae of any crime writer. There must be more to the story than this.

You'd think there was more, but I couldn't find much more online. I think it's ripe for invention. Have at it folks. I'm done writing novels for now.