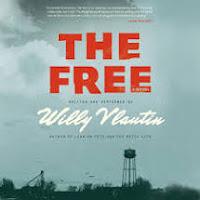 Is there a kinder soul writing today than Willy Vlautin? Although there are villainous characters in his novels, he keeps them off-stage most of the time and usually gives you a reason for the villainy. THE FREE looks at three or so overlapping characters in a small Southern town. This story revolves around Leroy, an injured Vet who, in attempting to kill himself, ends up in a coma. There is nurse Pauline, who cares for her patients with great tenderness. She also care for her miserable father who criticizes her as she is spooning soup into his mouth, and there is a opiod-addicted teenager, Jo who can't seem to extricate herself for the guys who got her hooked. And then there is Freddy, hoping he will get to see his daughters and working for an abusive jerk. There are so many moments of grace for each of these characters, it serves to lift you up despite their harsh circumstances. I've got his new one waiting for me.

This is a good choice, Patti! We need kind souls and a re-focus on what lifts us up right now...

It's great to find a writer who delivers time after time.

And boy he does. Yes, Margot, that is Vlautin's gift.

If you had to pick one of his to start with, which would you recommend?

I loved LEAN ON PETE the most.

And the movie is great too.