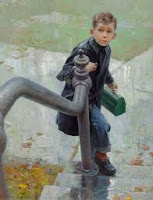 "Doctor Jack O'Lantern" is the first story in Richard Yates' ELEVEN KINDS OF LONELINESS, which is one of my favorite story collections by one of my favorite authors. Yates also wrote REVOLUTIONARY ROAD and EASTER PARADE. All three are excellent.

This is a poignant story about a young teacher trying very hard to be a good one and a student who fails both to please her and to fit into his new school. Vinny has come from the City and Yates captures Vinny's part of the city so well by describing how it is the part of NYC that you whizz by on your way to Grand Central and the real New York.

Vinny is a foster child and his new town is not a good fit for him. The teacher has her students tell about their weekend activities and his account is cobbled from the other children's stories. (Actually he shows more talent as a writer than the rest of them). Scorned by his classmates and sad to have disappointed his teacher, he scribbles four-letter words on a wall. There is a point in this story when he almost bridges the gap between the other boys and himself, but his well-meaning teacher derails that moment and his rage will be his downfall.

For those who don't get a chance to read it, Doctor Jack O'Lantern is his misunderstanding of Dr. Jekyll and Mr. Hyde.

I do have a soft spot for school stories, Patti. Probably it's because of my academic background. I'm glad you enjoyed it, and the rest of the collection.

Richard Yates is an underrated writer and "Doctor Jack O'Lantern" is a perfect story for the run-up to Halloween! Nice choice!

Oh, crap. I forgot about Wednesday. Sorry. Like you, I am a big Richard Yates fan, and the three books you mentioned are right up there. From the outside, he seems to have had kind of a sad life, but he turned it into some stories that will last.

Not the same, but the last memorable stories I read were "The Girl With the Harlequin Glasses" and "Passion and Affect" (the title story of the collection) by Laurie Colwin. Anyone who has read her most famous book, the delightful Happy All the Time (1978), and who is interested in the origins of Vincent and Guido, and Misty and Holly, would enjoy reading this. Sadly, Colwin died of a heart attack at only 48, but her books are a nice change from what is going on in the world today.

Of course, I adore Colwin. Her death was a great shock. As was Carol Shields early death.

Charles Baxter has a great school story, Margot. I will have to do that next.

Thanks for the recommendation. I've never read Yates before, seen his name around a lot. Always seems to be more than I can get to, and the list keeps growing longer every day.

Non-recommendation of C.D.B. Bryan's "So Much Unfairness of Things"...the launching pad for novel-length expansion, IIRC...but I have an obscure Yates book I've been meaning to dive into for literally years...I can only hope it wasn't in one of the total-loss waterlogged boxes soaked in the two basement flood. (It has been a while since I've seen it.)

My SSW entry is typically late, in part because I needed to find a half-decent pair of reading glasses to read some of the texts! Cataracts in the mid-40s, and the far-sightedness is cure results in! Calloo, callay.

Mine is now up.

This story sounds interesting, thanks.

And, hey, an hour, four hours...cats won't pat themselves, among other obligations.

Sorry for the delay!

I would like to read something by Richard Yates, maybe short stories are a good place to start.

I don't know if it's because I use some relatively Busy formatting, but it sure would be nice if just once my Blogspot posts looked essentially the same in, say, Chrome and Safari.