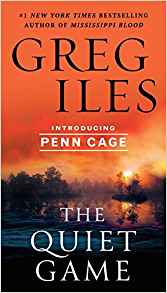 To be perfectly honest, I've never written a book review. For me books have always been a personal journey, something I've kept to myself, so I hope you'll bear with me as I tell you a little about the book I chose.
The book is "The Quiet Game" by Greg Iles. I'd been dipping into the work of several Southern writers when I stumbled across The Quiet Game. Published in 1999, the book centers around a thirty year old mystery.
Penn Cage is a lawyer who, with his daughter, returns to his parent's home in Natchez, Mississippi so the two of them can heal after the death of his wife. He gets prodded into investigating the unsolved murder of a black man in 1968. A murder that neither the black nor white community wants re-opened. Everyone is guarding their secrets, playing the quiet game.
Iles lays bare the undercurrents of a small southern town from the racial to the political. His wonderful writing weaves the secrets of the past into the secret lives of the present, exploring the effects of choices on people, their families and the community.
My poor summary doesn't do justice to the many layers that Mr. Iles has written into this book. His words make you sit up and think, chew your fingernails when things go terribly wrong, and smile when you realize that under all the conspiracy and mayhem the story is about justice in its truest sense.
Posted by pattinase (abbott) at 6:00 AM

I haven't read Iles in a very long time, Patti - thanks for the reminder.

Marvelous review! I have several Greg Iles books waiting to be read. But they's all Big Fat Books (500+ pages) so I've been passing them up for shorter books.

I agree with George. I've always meant to read Iles, but I have been put off by the length of his books. Sounds good.