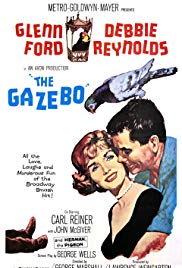 This is an odd little film. Glenn Ford is a TV writer who is being blackmailed over some salacious photos of his wife taken years earlier. She is now a Broadway star. He pays up until he can't any longer and then decides to knock off the blackmailer. Carl Reiner plays his police detective friend. Almost the entire film revolves around this idea and although it is funny at times and dark at others, it seemed like a play more than a movie. They seldom venture outside of the living room and the backyard gazebo. Debbie doesn't get to do much at all. Glenn Ford is better at comedy than I would have expected though.

It really is forgotten. I recognize the name and I know I've seen it, but even your description doesn't make me remember anything about it...other than the gazebo itself.

And it was based on a play, by Alec Coppel, though he didn't write the movie. He did, however, co-write the screenplay of VERTIGO the year before.

Oh, this is one I've not seen, Patti. I love it that you come up with these films I should explore.

This was a favorite movie of my mother!
She and I watched it every time it was on TV.
I don't know who the actor is but his misprononciation
always made me laugh: The GAZ-bow!

Saw it a long time ago. Wasn't impressed. Never a fan of Glenn Ford. Always thought him about as expressive as a piece of wood.

Yes and he was not expressive in this. But he pulled off the slapstick fairly nimbly.

I can't really say it here, but my mother worked for several show business people in New York and California, and often came home with some juicy gossip. The story about Glenn Ford, if true, is right up there with any of them. Let's just say Steve's comment rang a bell.

Well, FWIW, you can't legally libel the dead. Now we just wonder what kind of splintering Ford was up to.

If it seemed like a play that's because it was one. The movie is based on Alec Coppel's play. Coppel also adapted for the screen his excellent crime thriller A Man about a Dog. You can find it online at various video and movie sites under the title A HIDDEN ROOM. I watched it using my Prime Video benefit at Amazon. Really one of the best truly forgotten crime movies I've seen in a long time.

The speaker was the great John McGiver, playing a bit more rural than was his norm.
Mr. McGiver lived in upstate New York, with his wife and ten children, in what was once a Presbyterian church.
The McGiver family (Catholics, by the way) spent years (and money) restoring the building, using local workers; John McGiver reportedly based the Gazebo character on one of these locals.
That's the story, anyway …